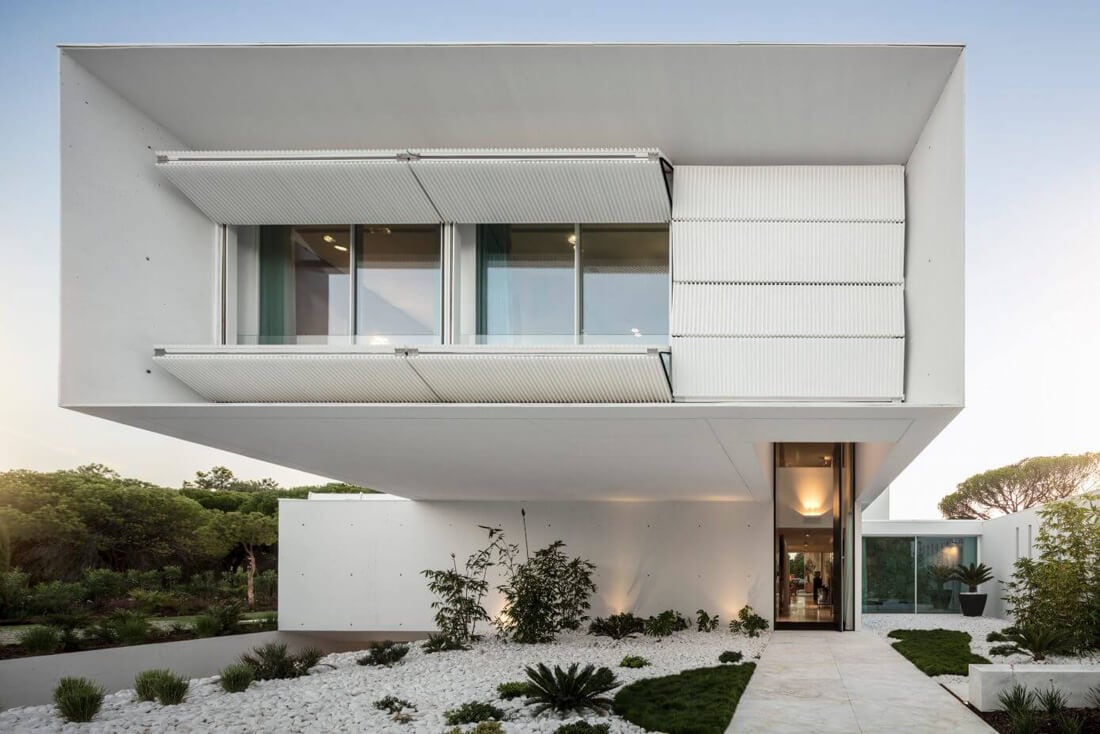 Settled in Algarve, Portugal, this refreshing house was created by Visioarq Arquitectos. “The QL House is inhabited in one of the most expensive areas of Algarve, on the Portuguese southern coast, a singular appearance in a primarily residential neighborhood. From where it was erected it is possible to see amazing surroundings: golf courses, residences, the estuary and, controlling the background, the Atlantic Ocean. The QL House project was an exercise in balancing spaces and landscape integration. The articulation of two extending and perpendicular spaces generated not only a particular spatial dynamic but also different visual relations between full and empty, light and dark – caused by the dynamic of shadows – between private areas, semi-private areas and the view of the surrounding landscape. Two stories and a basement encapsulate a precise functional program: garden, swimming pool, sunroom, living and dining room, bathrooms, a regular kitchen and a summer kitchen, four bedrooms, an office and space for a playroom. Circulation takes place through a continuous stairway along the indoor garden, which decorates all the indoor spaces in this home. This nuclear garden structures the primary interaction between the whole indoors and the outdoors, gifting all spaces of the QL House with the luxury of natural lighting. The spaces were designed to create constant and singular relations between the indoor and outdoor spaces, in a permanent and multifaceted dialogue. The bedrooms, on the first floor, face the green surrounding landscape and take advantage of the terrace on the roof of the living room and summer kitchen in order to create areas for contemplation on the top floor. The space occupied by the bedrooms extends in both directions beyond the bounds of the first floor, hovering over the empty space, in a serene and quiet balance. On one side, a balanced veranda greets the main entrance to the house, on the other side, a pergola provides shade for the living area by the pool and living room, making particularly hot summers more enjoyable. The main entrance to the house is through a door of unusual dimensions, in line with the imposing scale – one of the singular features of this architectural piece. White concrete walls formalize the spaces in the QL House, in a chromatic mimicry of the buildings in this region of Portugal – designed with a particularly hot climate in mind. The natural cork lining, a traditional Portuguese material, is articulated in the connection between the space and the land. The bedrooms, on the other hand, feature slats and motorized metallic shutters in their lateral openings, which filter light without making it impossible to contemplate the surrounding landscape, surely one of the valuable assets of the QL House. The project was structured primarily with the goal of valuing the relationship between the indoor and outdoor spaces, the creation of complicities between the user and the landscape, and the former with the created space. As built, the QL House exceeded expectations and once again endorses the work of Visioarq- Arquitetos.” 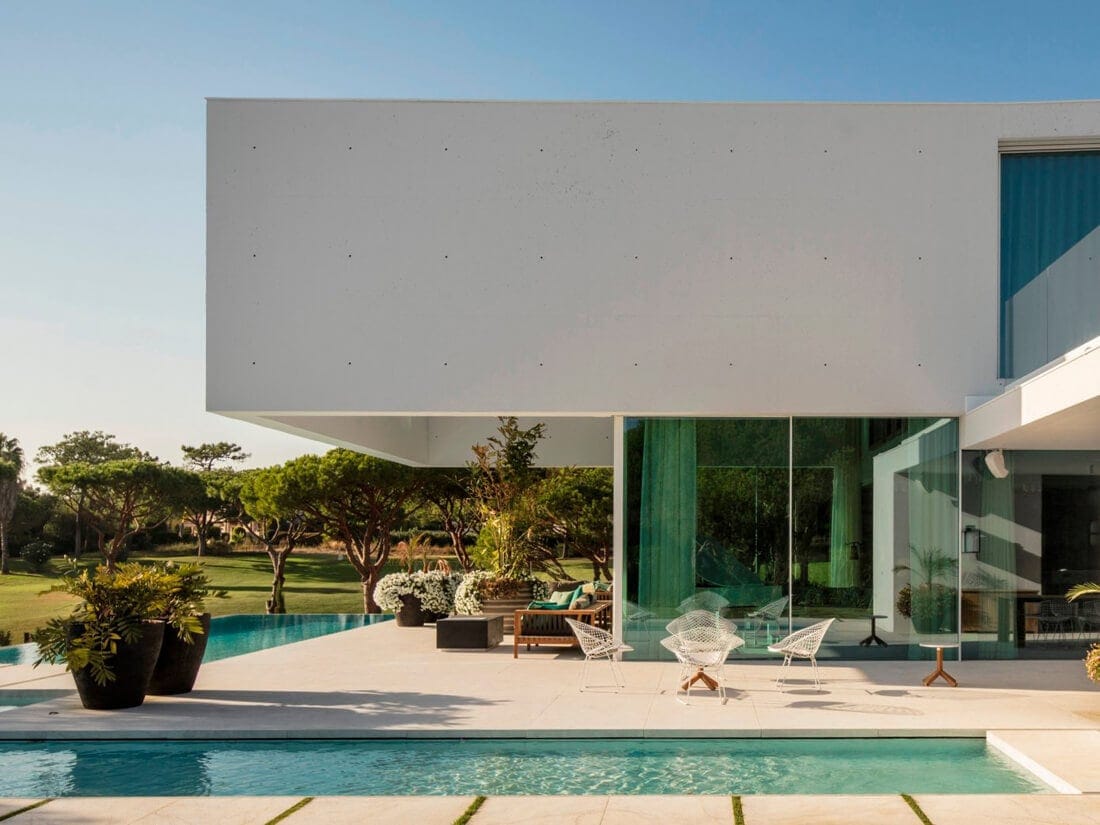 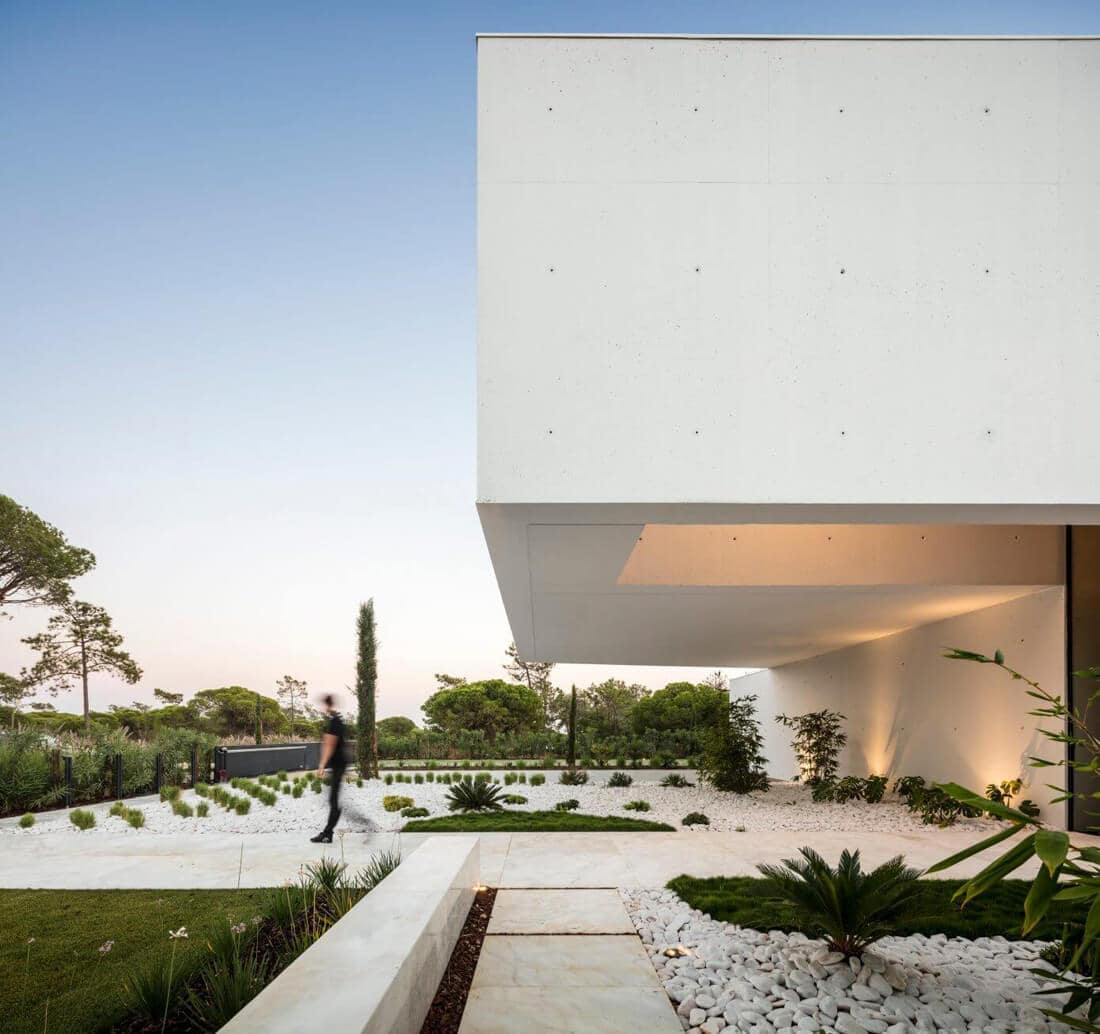 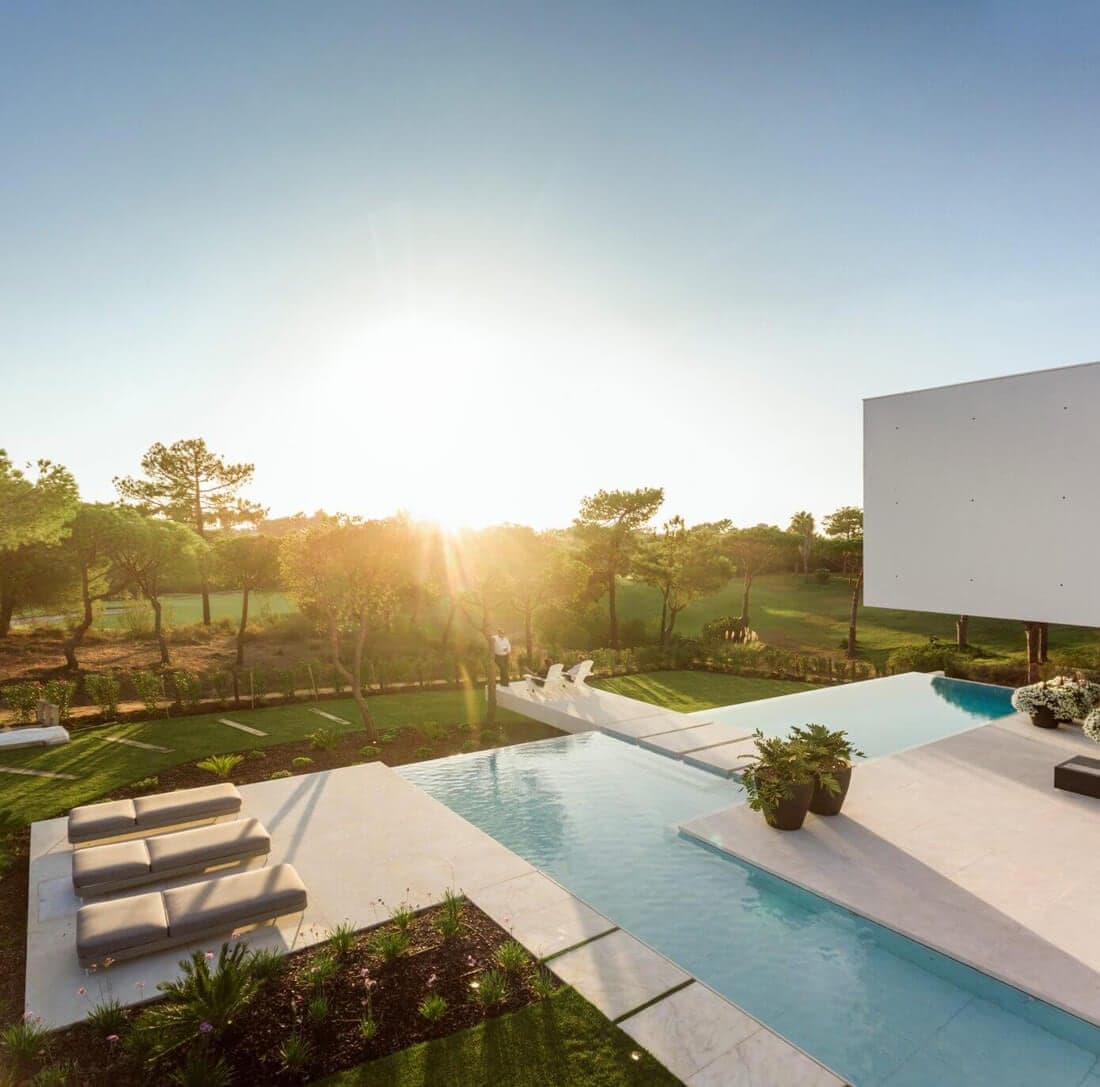 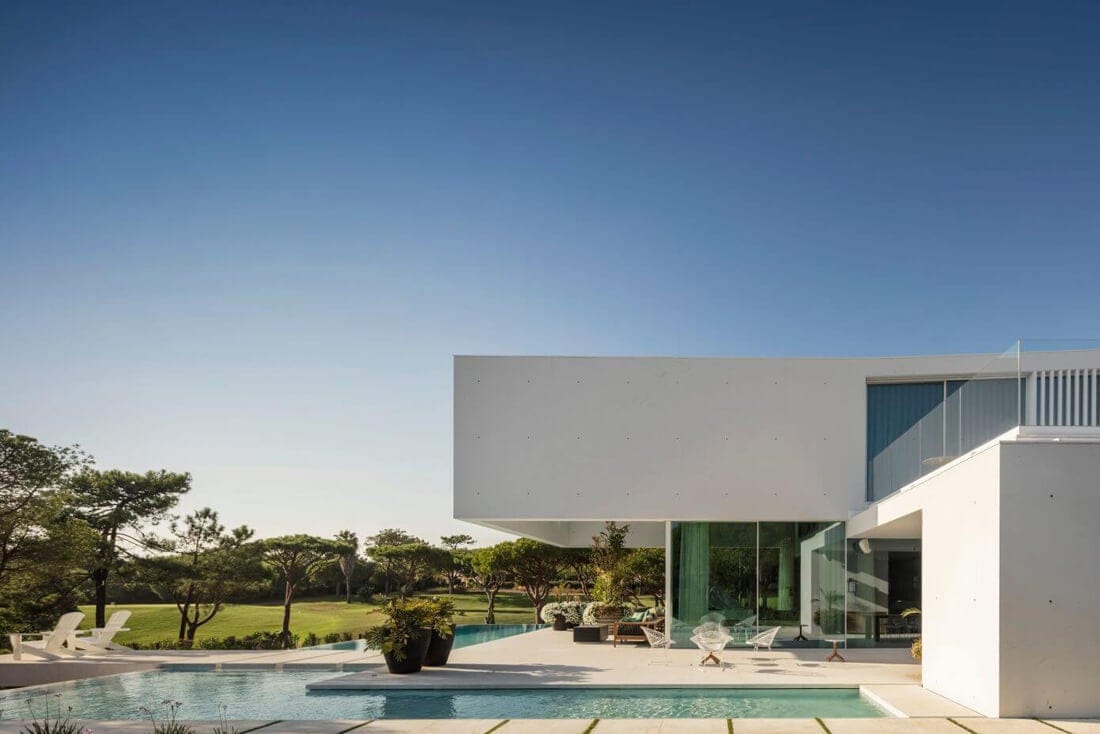 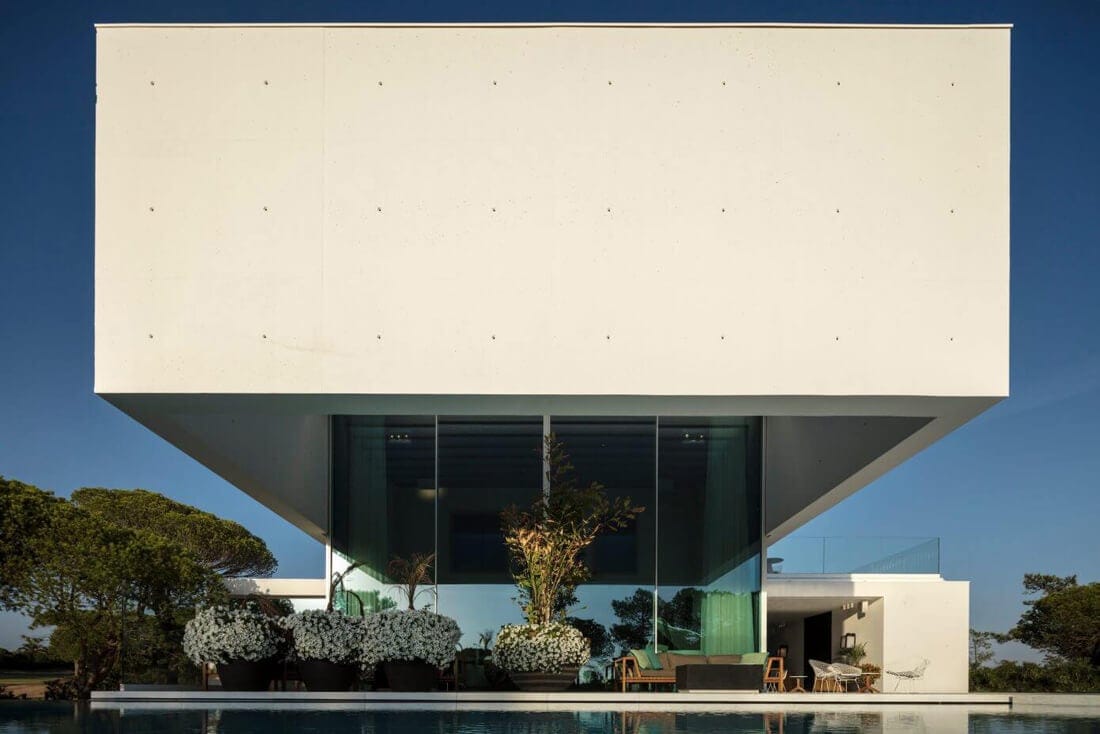 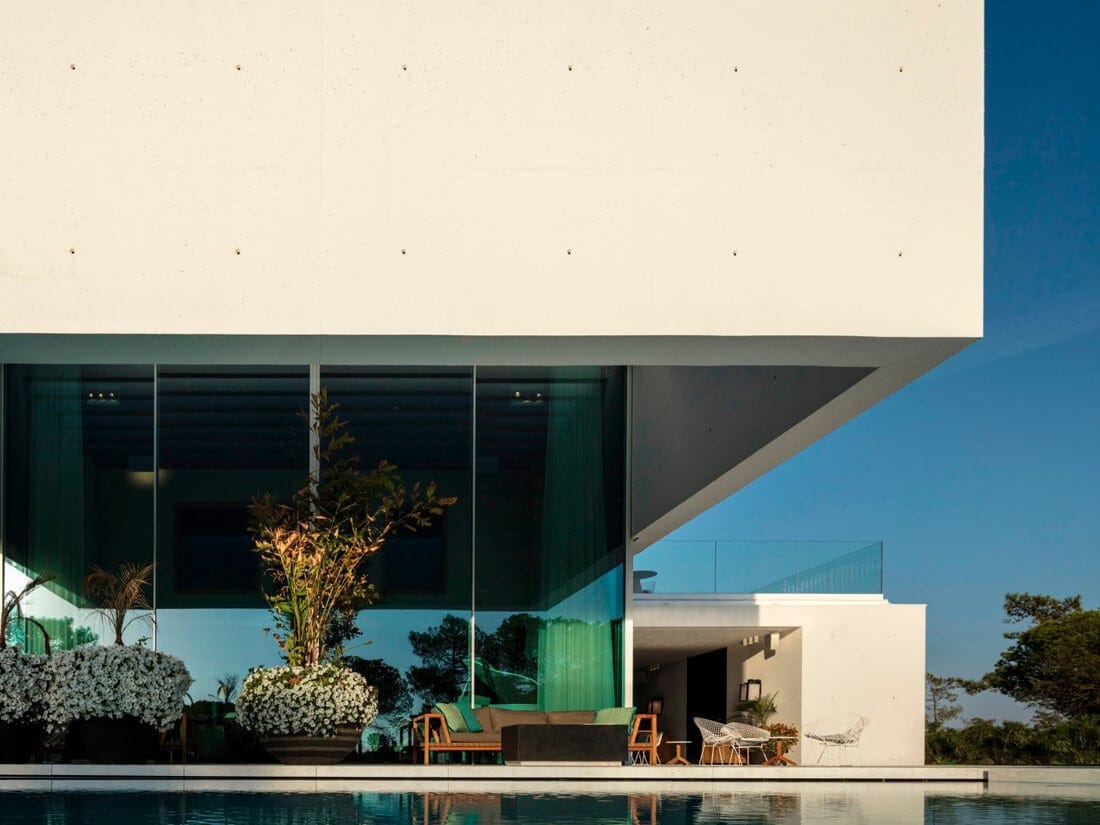 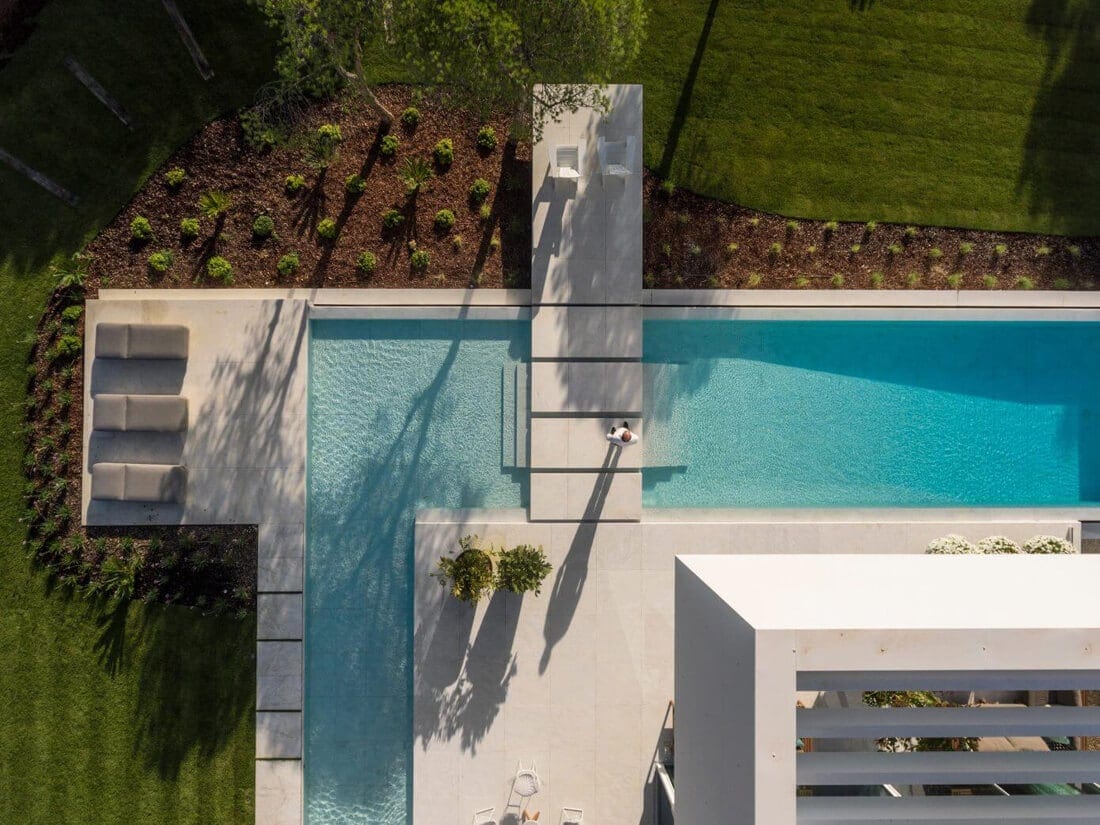 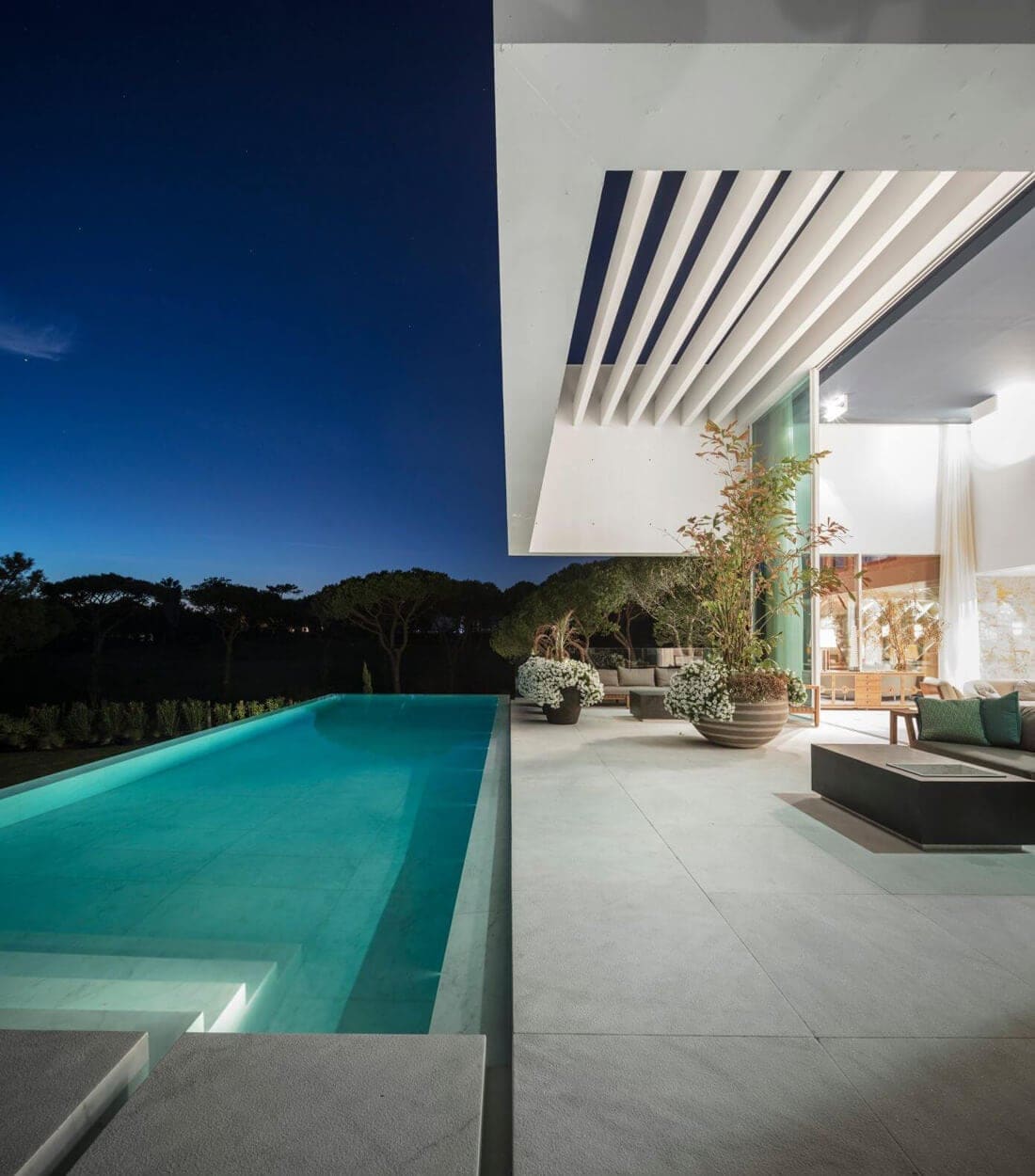 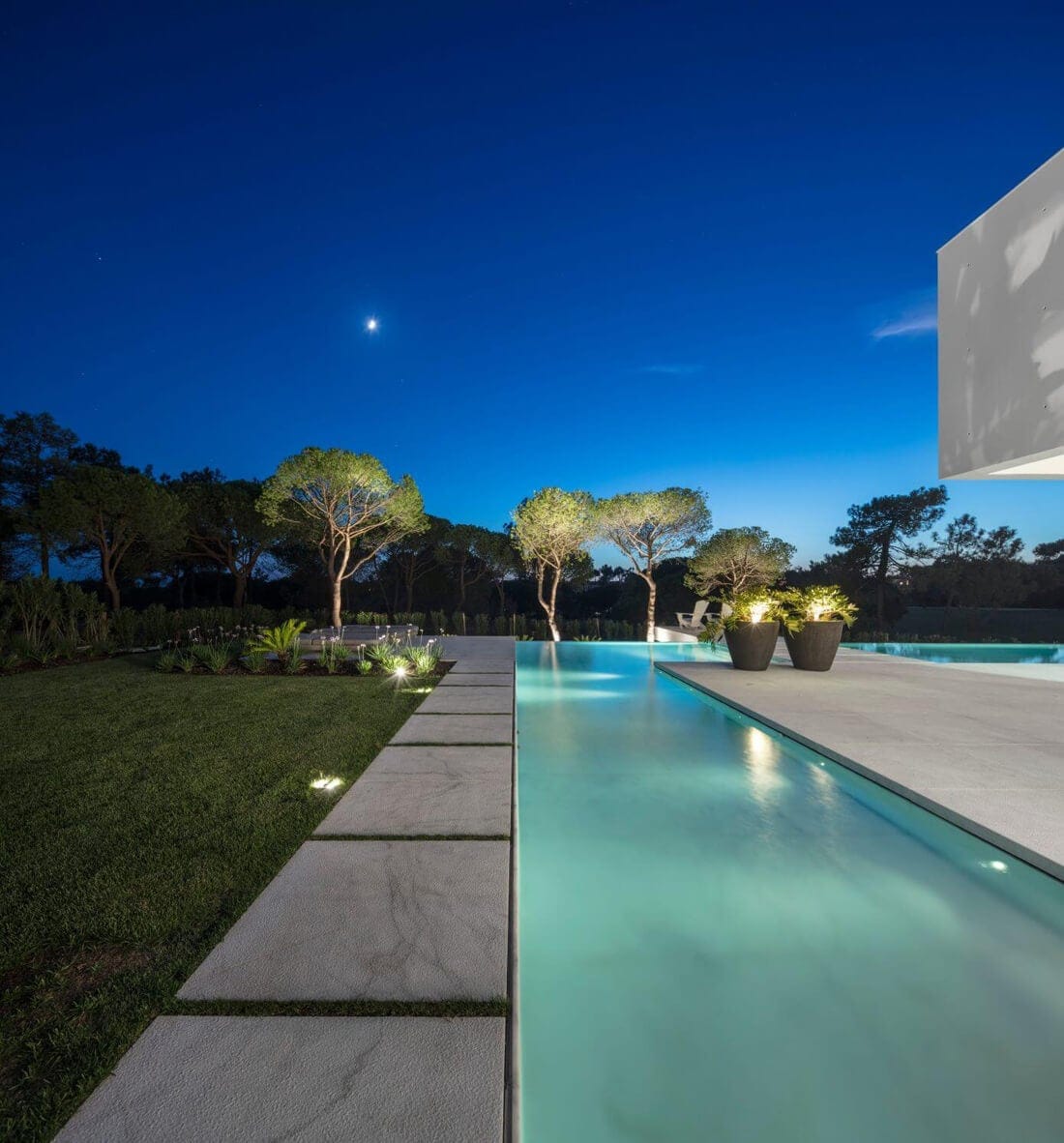 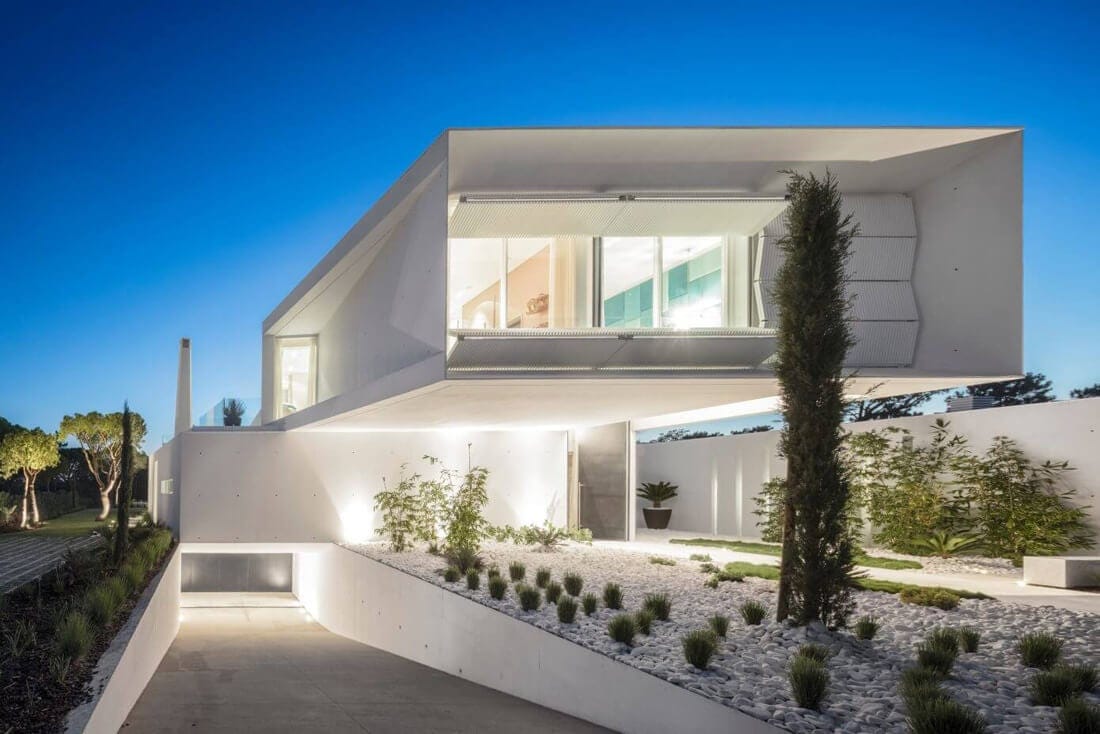 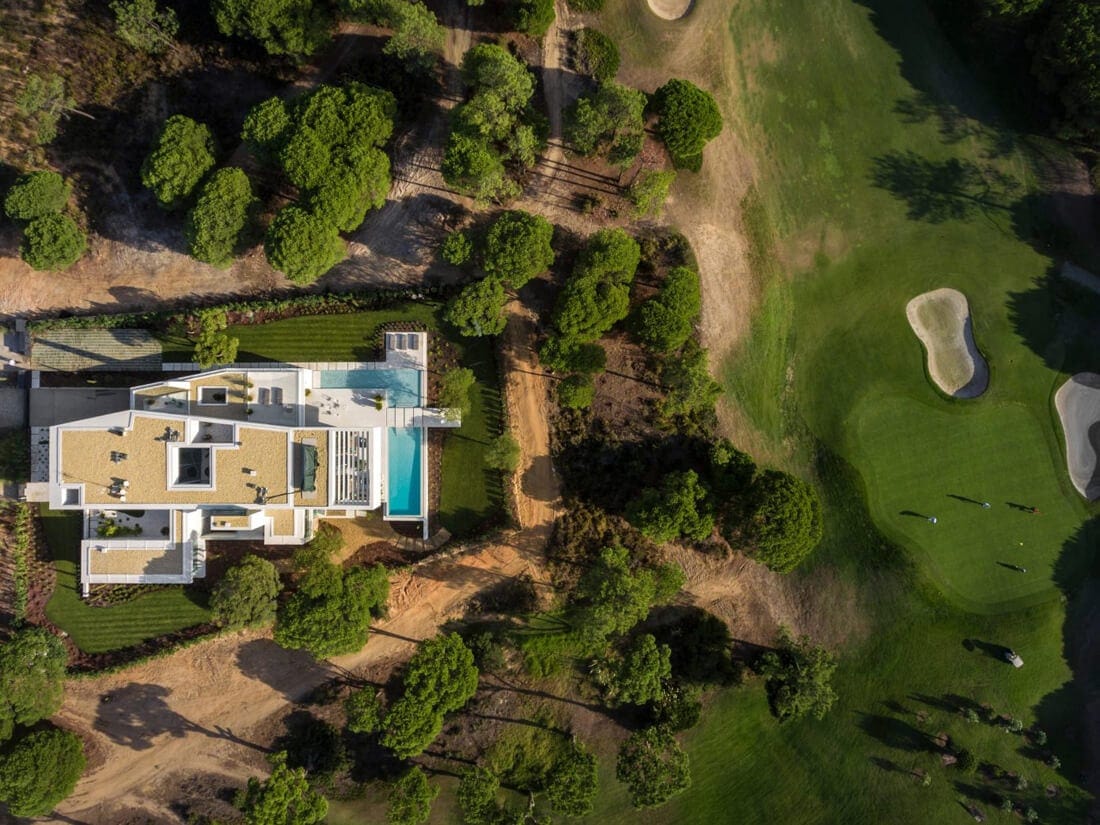 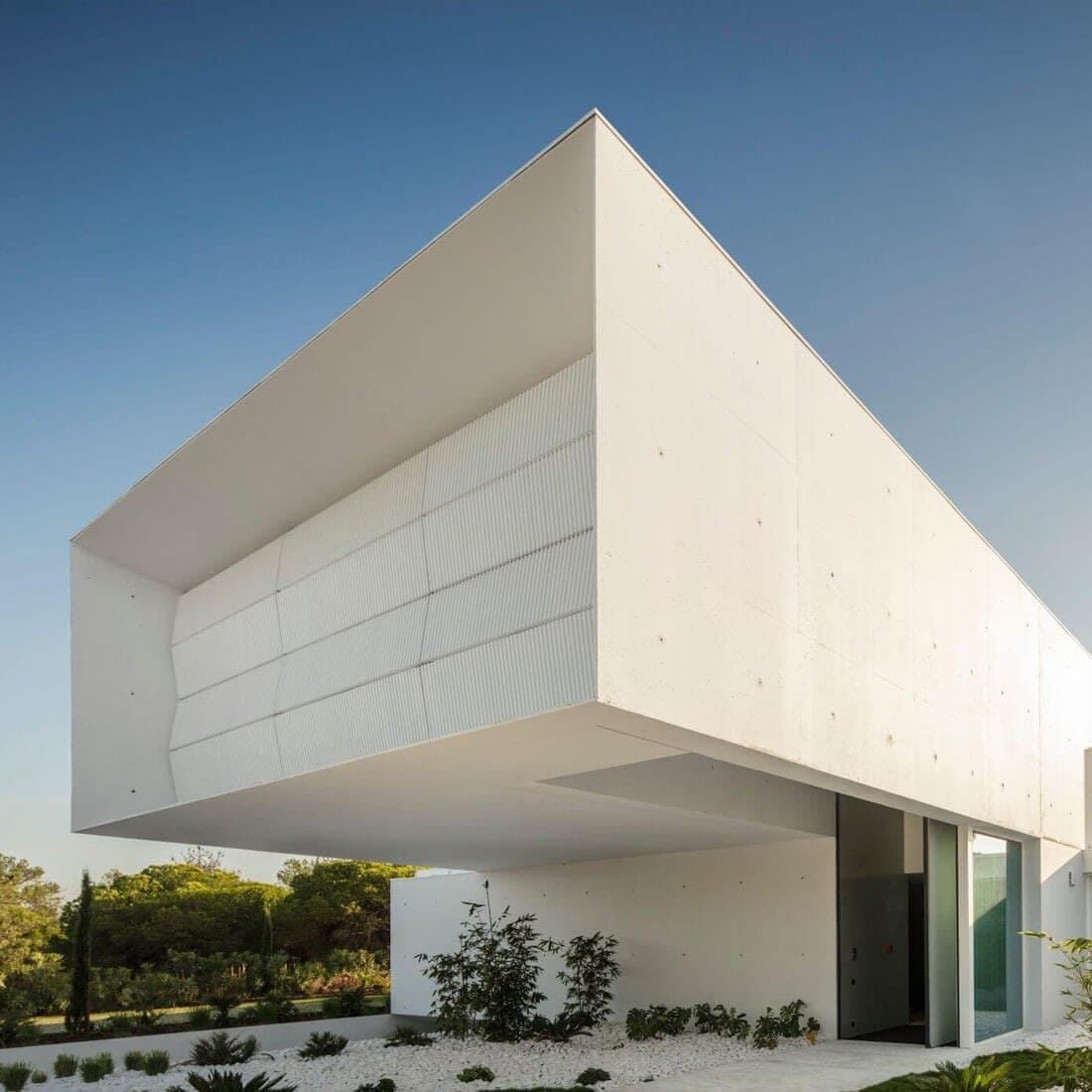