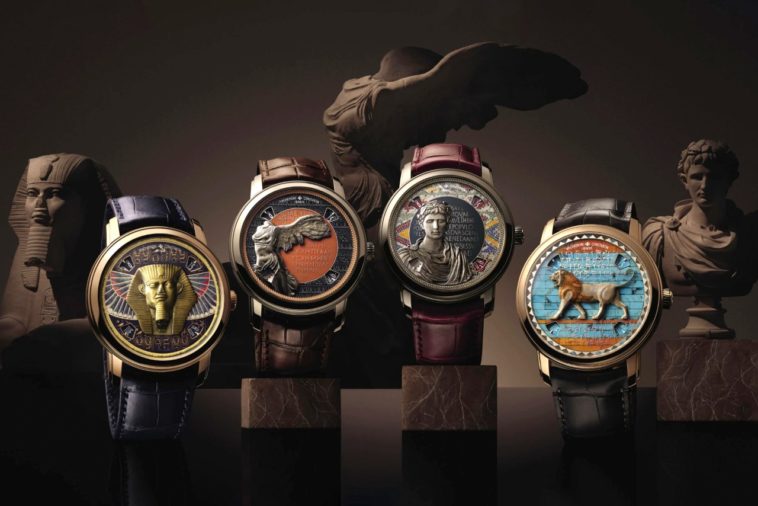 The watchmakers at Vacheron Constantin have unveiled a new series of watches in collaboration with the Louvre Museum. Dubbed the “Tribute to Great Civilisations” series, it pays tribute to four of the most significant civilizations in human history. Each watch face depicts an iconic masterpiece from one of these civilizations, housed at the Louvre. For the VC designers and workers, creating these watches was a labor of love – and it was no easy feat. These timepieces had to capture the splendor of an entire culture. Each clock is meticulously detailed, with tiny features carved, painted, inserted, and assembled by hand. They appear to be unrivaled in terms of value, and they are a magnificent illustration of why Vacheron Constantin has been a renowned watch brand for over 260 years.

Each timepiece feels like a relic – a testament to Vacheron Constantin’s sheer craftsmanship in the way they’re put together. All four watches are powered by Vacheron’s self-winding Manufacture Calibre 2460 G4/2, a one-of-a-kind mechanism that lays out the watch’s hours, minutes, day, and date, leaving the center area open for the watch’s major work of art: its meticulously handcrafted artwork. The lack of a conventional movement is also logical, allowing the designs to shine without being distracted by any moving or ticking hands. The Sphinx of Egypt, the statue of Victory from Hellenistic Greece, the bust of Octavian Augustus from Julius Caesar’s Roman Empire, and the Lion relief sculpture from Darius’ Persian Empire are the four pieces (from left to right) in this collection.

The Sphinx of Egypt is the most famous and well-known artifact of the four. One of the world’s most giant sphinxes, acquired in 1826 by Henry Salt, was part of his collection at The British Consulate in Paris. The sphinx is integrated into the watch in the form of a replica of its face. The gold applique is set on a beautifully intricate enamel dial fired six times in a kiln to resemble as deep and vibrant as it does. The watch is completed with a sapphire crystal cover featuring metalized hieroglyphic markings as a signature flair.

The time between Alexander the Great’s death and Cleopatra’s is known as the Hellenistic Period. This period saw a new wave of Greek settlement, with Greek cities and kingdoms established throughout Asia and Africa. The statue of Victory, a winged goddess sitting on the bow of a warship, was recovered in 1863 from Samothrace in the northern Aegean Sea and depicted an offering connected to a naval triumph. It was discovered during excavation work at a temple for the Great Deities. The figure’s pose and drapery are both aware of the hour hand, proportioned after an antique statue. The minute hands noted in blue refer to specific details on the dial, such as feathers on the wings and folds and creases in the garment covering. The main dial, which is enameled brown, was a challenging color due to its rarity and complexity; seven different enamels were used along with six firings in the kiln.

The bust of Octavian Augustus, Caesar’s adopted son and the first Roman Emperor, depicts him wearing an oak wreath after a Senate decision in 27 BC made him the principate of Rome. Creating this item was difficult for Vacheron Constantin, especially in the rim, which has an intricately put micro-mosaic. At least seven distinct types of stones – 660 in all – were employed to create this tiny mosaic. On the other hand, the mosaic merely draws attention to the Buste d’Auguste’s carved gold applique with a draped cape, together with the breastplate and secured by a fibula, and embellished with an oak crown around which Augustus’ hair curls.

The Achaemenid Persian Empire (559-330 B.C.) is the subject of the final artwork. It unifies the Middle Eastern’s oldest civilizations, with a domain extending from Pakistan to the Black Sea, from central Asia to Egypt and Libya. It united ancient civilizations in what is now Iran. The Frieze of Lions, a glazed brick decoration, was in Darius the Great’s palace in Susa’s first courtyard. This timepiece features the “Lion de Darius,” practically an empire icon. The lion carved in this piece of art is seated on a stone marquetry floor, which alludes to the glazed brick decoration applied to a wall. The inscription cut into the sapphire crystal by metallization is one of Darius’ first writings when he took power.

The insides of these timepieces, equally as meticulously created as their exteriors, are just as intricately put together, as is demonstrated by the watches’ exhibition rear. The back of the timepieces is finished with an oscillating weight that depicts the Louvre’s magnificent arcade, based on an 18th-century lithograph of the museum’s eastern façade.

Each of the timepieces is limited to just five pieces, given that they’re all entirely made by hand. The price of the watches has not yet been revealed, but such exquisite artistry will undoubtedly be pricey. The timepieces are only accessible in Vacheron Constantin boutiques if you’ve inherited a great deal of money or the crypto market has made you a millionaire.