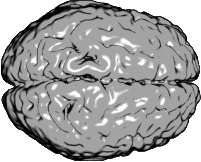 A cerebral hemisphere is one of the two regions of the vertebrate brain that are delineated by the median plane,. The brain can thus be described as being divided into left and right cerebral hemispheres. Each of these hemispheres has an outer layer of grey matter called the cerebral cortex that is supported by an inner layer of white matter. In eutherian, i.e.