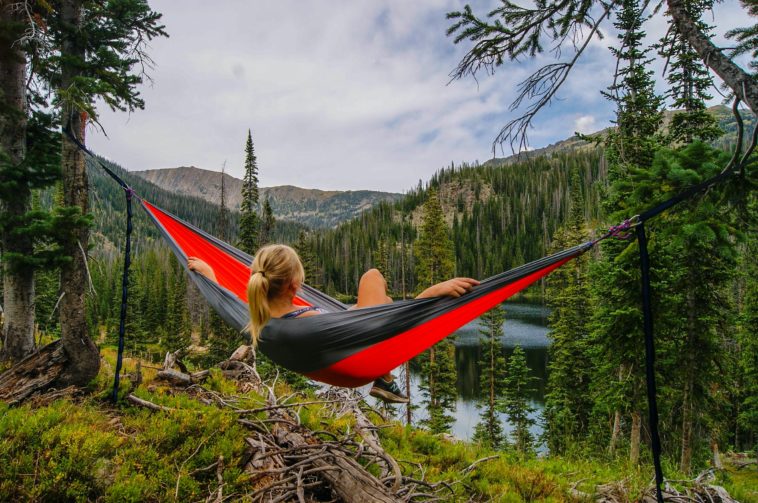 A hammock is a sling made of fabric, rope, or netting, suspended between two points that you hang from. It normally consists of one or more cloth panels or a woven network of twine or thin ropes stretched with ropes between two firm anchor points such as trees or posts. Native inhabitants in Central and South America invented the first hammocks about 3000 years ago.

Hammocks were developed by native inhabitants of Central and South America for sleeping. Hammocks are also popular in many regions globally, such as Jamaica, Brazil, and Australia, as an alternative to lying on the ground or existing chairs or sofas when staying overnight indoors or outdoors. They are especially common among campers, rock climbers, backpackers, military personnel, and children’s summer camps.

The word hammock comes from a West African language via Portuguese “hamaca”, which means ‘stringed net’ (from Kikongo “nki” ‘net’, “make” ‘neck’). Hammocks have existed in one form or another for thousands of years; their origins are difficult to discern because of their lightness, portability, and ease of construction.

Generally, hammocks are hung indoors when not in use (especially in the tropics), while camping, or during sleepovers. Hammocks can also be hung outside to provide extra sleeping space for guests. Hammocks are popularly made of canvas or nylon fabric; however, traditional hammocks were woven out of bark from trees native to Central and South America like the Araucaria tree or palms such as Thatch Palm.

Many references describe a Caribbean origin, including an account by Turner (1768), who wrote, “The West-Indians have several Hammocks made of Grass, or sometimes the whole Copra, which they hang up within Doors to sleep in.”