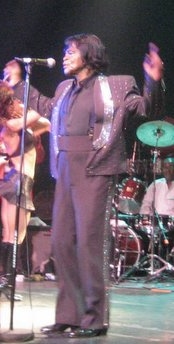 James Joseph Brown (May 3, 1933 – December 25, 2006) was an American singer, songwriter, musician, and recording artist. He is one of the founding fathers of funk music and is a major figure of 20th century popular music and dance. In a career that spanned six decades, Brown profoundly influenced the development of many different musical genres. Brown moved on a continuum of blues and gospel-based forms and styles to a profoundly “Africanized” approach to music making.