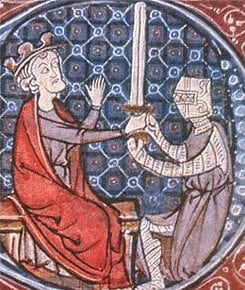 A knight is a person granted an honorary title of knighthood by a monarch or other political leader for service to the monarch or country, especially in a military capacity. Historically, in Europe, knighthood has been conferred upon mounted warriors. During the High Middle Ages, knighthood was considered a class of lower nobility. By the Late Middle Ages, the rank had become associated with the ideals of chivalry, a code of conduct for the perfect courtly Christian warrior.