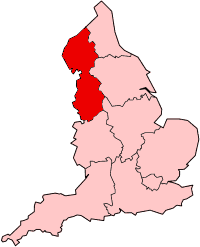 North West England is one of nine official regions of England at the first level of NUTS for statistical purposes. The region comprises five ceremonial counties of England – Cumbria, Lancashire, Greater Manchester, Merseyside and Cheshire. The North West had a population of 7,052,000 in 2011. It is the third most populated region after Greater London and the South East.