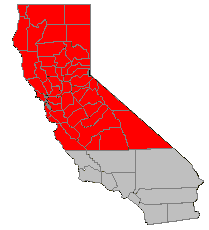 Northern California is the northern portion of the U.S. state of California. The San Francisco Bay Area, and Sacramento (the state capital) as well as its metropolitan area are the main population centers. It also contains redwood forests, along with the Sierra Nevada including Yosemite Valley and part of Lake Tahoe, Mount Shasta, and the northern half of the Central Valley, one of the world’s most productive agricultural regions.