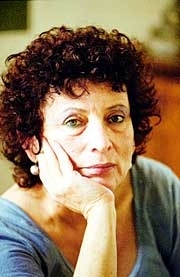 Nurit Zarchi (born Jerusalem, October 19, 1941; 28 Tishri 5702 AM) is an Israeli poet and author for adults and children. Her father was the author Israel Zarchi. He died when she was six, leaving her an orphan. She was raised at Kibbutz Geva as a guest. Later she went to Ein Harod, where she completed her secondary schooling. After her military service, she completed studies in psychology at the Hebrew University of Jerusalem.