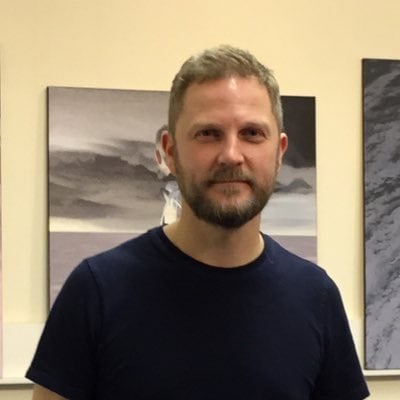 Scottish artist Iain Faulkner graduated from Glasgow School of Art in 1996 with a BA in Fine Art. He has had numerous solo shows in the UK, USA, France, Switzerland, Spain, and Italy.
He’s had numerous solo shows in the United Kingdom, USA, France, Switzerland, Spain, and Italy. His work appears in many private and corporate collections; in 2010 he was commissioned to paint the European Ryder Cup Team member portraits. He has a very long association with the Albemarle Gallery and its new incarnation, Pontone Gallery, where the directors are proud to present the artist’s latest series of paintings.

These works feature a lone protagonist. Dressed uniformly in the white shirt, black suit trousers, and leather shoes, we all see him paused between actions at a moment of reflection, pre-occupation or self-absorption. These scenes emphasize moments of withdrawal and consolidation, where the topic turns inward. He appears rootless and world-weary, in transit in a hotel or the wheel of a car or motor-boat. The images imply a sense of a nomadic existence. The simple fact that his face is obscured or flipped away allows us to see that this amount as an everyman, a participant both familiar and universal.

The images are left in a highly-controlled, meticulously-realized emblematic technique, where skillful draughtsmanship and a masterful treatment of shade and light combine to articulate the structure, space, and atmosphere. Faulkner deploys a cool palette dominated by bluish tones of black, white and grey to make serene detachment. The paintings abound in reflective surfaces: glass, polished chrome, and painted metal refract, fragment and replicate.

These images are amorous. They conjure ideas of contemporary, male heroes. Solitary and brooding, these figures suggest alienation, but also speak of autonomy and durability. They bring to mind Casper David Friedrich’s ‘Wanderer’ or ‘bands dessinées’ personalities as well as Ian Fleming’s peripatetic Scot. There is a sense that these ‘illustrated pauses’ are strategic interludes where ideas are arranged and decisions made before getting back in the saddle and re-joining the fray.