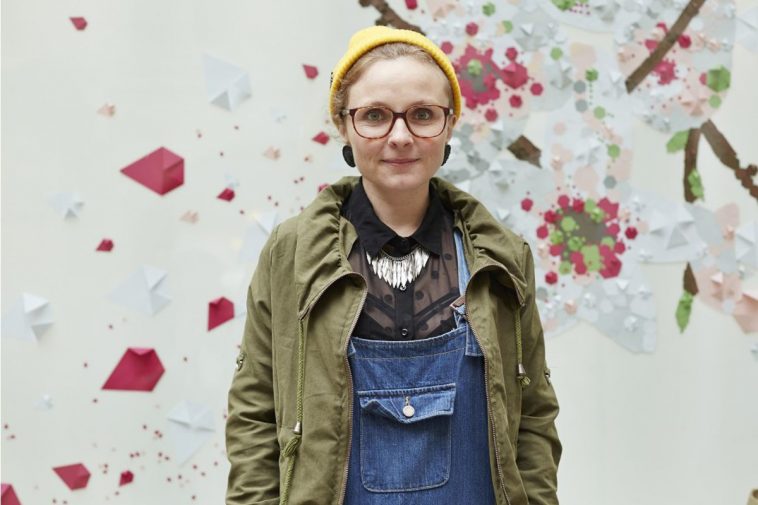 Born and raised in the high mountains of Savoy, Mademoiselle Maurice is a French artist of 29 years. Following study Architecture at Lyon, worked in Geneva and Marseille she has settled before heading live in Japan.

Following this year at the country of the sunlight, along with the awful events of 11 March 2011 (earthquakes, tsunami and atomic power plant explosion of Fukushima) while residing in Tokyo, she chose to start writing its urban and artistic works in connection with these details.

Now based between Paris and Marseille, Mademoiselle Maurice develops and creates in her studio vibrant works with the fruits of a wealthy influences and career classes.

Via paint, paper, metal, or other combined recycled and media stuffs, she gave birth to functions in tune with their everyday lives.

These fetishes moderate are paper and thread, she enjoys to form these natural materials in a intricate way.

Rising in the Paris gray, so was created a nebulous breaking functions with urban monotony. Actual Details of this city as his life’s work of this young artist imaginative displays radically beyond the walls of his workspace.

These publicly positive inventions, ultra vivid and instant needs, emanates a carousel of emotion or everybody is

Light in appearance, the work of Mademoiselle Maurice indicate and raises many questions about human nature and the connections that sustain individuals and the environment.

Some countries where Colors and Paper was:

The only walls that remain “forever” are in Saint-Quentin (Picardie), at Maryland channel (London) and at San Potito (Italia) (Walls with tiles) and in Sète (K-Live), at MAUSA (Jura) and at Berlin (Germany) (Walls with metal origami