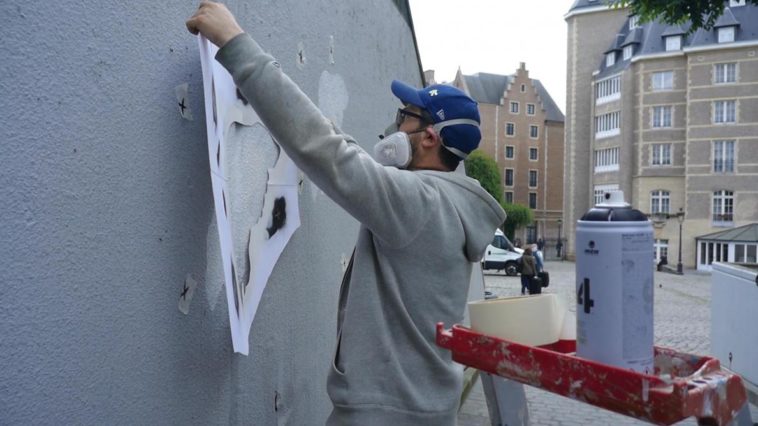 OakOak, a street artist from Saint-Étienne, is a pen-pusher by day and a superhero by night. His hilarious, creative, irreverent, and at times macabre street art has appeared in publications from BBC Brazil to Beijing’s biggest daily newspaper… By daubing simple graffiti and paintings on city infrastructure – particularly the broken ones – OakOak does what street art is meant to do, amuse and inspire people of all ages.

A street artist, however, is not a fine artist who paints in public. His pieces, whether painted on the streets of his hometown of St Etienne, France or carried out on his travels, are opportunistic and never “endorsed.” He’s uneducated in art and works full-time in an office. His favorite artist is Amedeo Modigliani, but he names his key influencers as football, comic books, video games, and his hometown. “I adore this city; it has a unique atmosphere.” OakOak explains of Saint-Étienne It was an industrial metropolis with many coal mines before now; it has a very sentimental side. I want to put color on grey, dirty walls.”

Just five years ago OakOak was “a very young vandal” who used his tag as the only way he felt he could express himself. Now, with over 400 pieces under his belt, he has realized that street art is an act of generosity.

“I don’t want to be locked up in a studio,” revealed OakOak, who has been painting graffiti since he was 13 years old. “I want people to see my works and take them with them in their memories.”

In that spirit, OakOak is currently working on his upcoming book The Adventures of OakOak & Alter Ego, a collection of short stories that features his inimitable style.