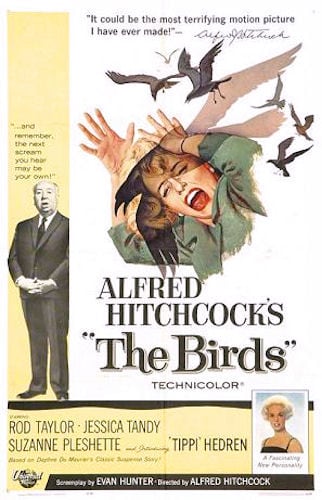 The Birds is a 1963 suspense/horror film directed by Alfred Hitchcock, loosely based on the 1952 story “The Birds” by Daphne du Maurier. It depicts Bodega Bay, California, which is, suddenly and for unexplained reasons, the subject of a series of widespread and violent bird attacks over the course of a few days. The film was billed as ‘introducing’ Tippi Hedren. It also starred Rod Taylor, Jessica Tandy, Suzanne Pleshette and a young Veronica Cartwright.