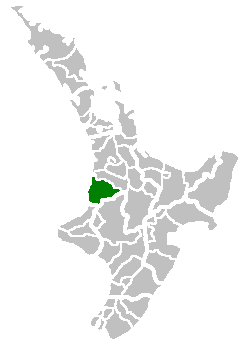 Waitomo District is a territorial authority in the north of the King Country region in the North Island of New Zealand. A small part of the district, the town of Tiroa, however, lies in the Manawatu-Wanganui region. The district is a rural, predominantly dairy farming, region. The seat of the Waitomo District Council is at Te Kuiti, which has a population of 4,419. No other village in the district has a population of over 500.