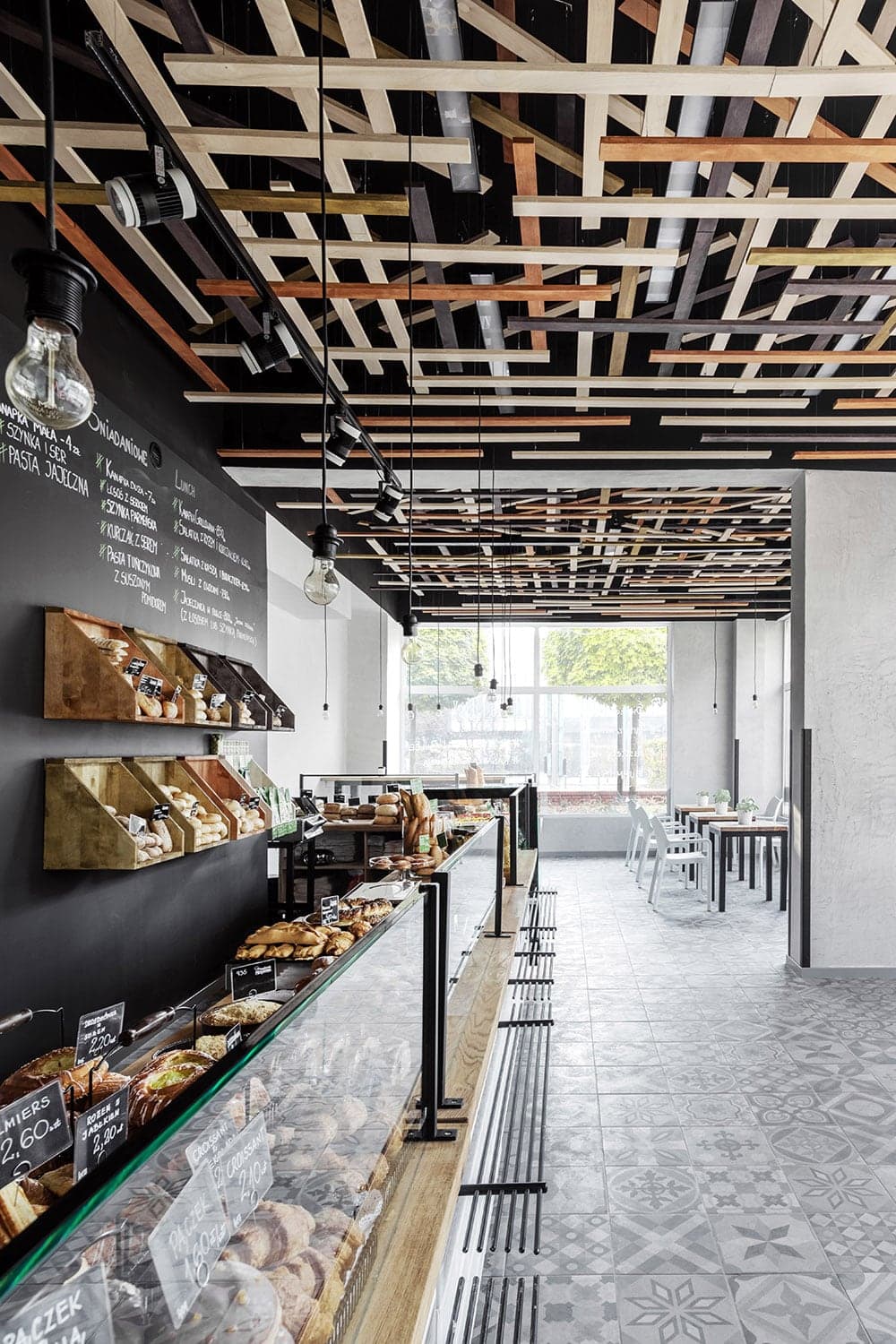 The presented sales premises of Przystanek Piekarnia bakery build upon the idea created for the entire chain in 2013 by Maciej Kurkowski, founder of the Five Cell design group.
Each of the interiors is equipped with a unique system of modules made of stained birch plywood. Depending on such parameters as location, size, and height of rooms, these modules may be used to create a suspended ceiling, display racks or serve both functions at once.
One example of the modules used as a suspended openwork structure is the interior of the bakery on Chłodna Street. This structure spreads out on four different levels. Each one follows a specific distribution pattern of the plywood panels. Although this system is made up of merely 300 elements, on account of the layering and plans that overlap from the user’s perspective, the ensuing effect is that of the optical lowering of the premises.
In turn, the low interior near Dąbrowskiego Street was transformed into sales premises with characteristically placed display racks. Here, the modules created a ‘packaging’ of sorts for the displayed products. The lighting also corresponds to the underlying motif of the whole design. Depending on the needs, the racks may be easily disassembled.
Przystanek Piekarnia bakeries on Hoża and Mołdawska Streets are examples of combining the suspended ceiling function with product display space. Both premises have common parameters, such as high ceilings and small usable area.
For the same reasons, the interior on Mołdawska Street is equipped with a solid form made of stained modules that serve as a multi-purpose item of furniture. It was created using 660 elements. A coffee machine, slicer, and sink are placed on the work surface, while hidden units with doors are fitted underneath it. Above, space has been made for display racks for baked products. The entire plywood structure extends from the walls to the ceiling, delicately lowering it and at the same time delineating the sales area. The furniture item also includes the main lighting components of the premises.
On account of its location and large glazed area, the interior on Marszałkowska Street required a structure that would attract passers-by. The openwork installation is composed of 350 elements combined into repetitive square modules mounted on the wall and ceiling. Here too the lighting plays a part in creating the atmosphere of the space, which is why its selection and placement are meant to match the plywood system.
Apart from the original system, all Przystanek Piekarnia bakeries are fitted with the same core arrangement of distressed grey plaster on walls, fragments of walls covered with black blackboard paint and oiled oak counters with fronts covered with convex tiles, with lightbulbs suspended above them.