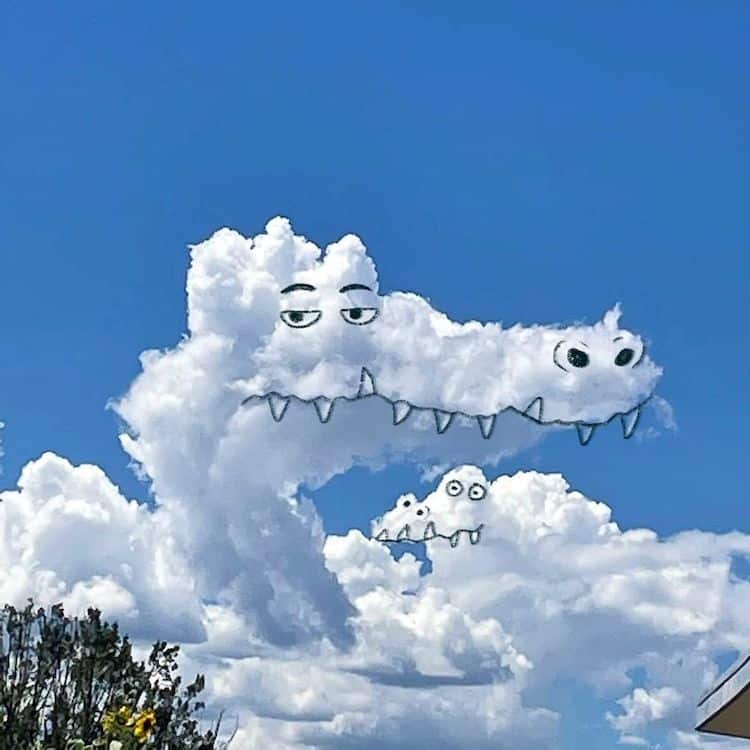 Daily Cloud is an artwork by Chris Judge that aspires to make people happy through his illustrations. Each day, a new photo of a cloud turned into a character is shared on social media. The project originated from an idea that came to Judge during the first COVID-19 lockdown in 2020. He spent more time with his family in the yard and shared some of his illustrations on social media. To his enjoyment, he received positive feedback for them. Since then, the whimsical idea has continued to grow, sharing “happy cloud art” in people’s feeds daily.

Judge transforms innocent-looking clouds from grumpy alligators to snoozing bears into a cast of bizarre creatures. And it’s not always as easy as it looks—sometimes, he has to get creative and find faces in places most people wouldn’t think to look. The style must also be minimal so the doodles don’t obscure too much of the cloud itself. “I try to draw as few lines as possible, so the shape of the cloud does most of the work,” he said.

Initially, Judge supplied most of the photos, but now he receives numerous submissions from his followers. This means that the art inspiration is neverending. Judge stated that on gorgeous cloudy days, he takes several photos with his iPhone or Canon M6 Mark ii. “I select an image that I either took or someone submitted to me that I think will look good, and then I put it into Procreate,” Judge says of his process. From there, he lets the image inspire his drawing, culminating in a new piece for his series.

Scroll down for more cloud illustrations, and follow A Daily Cloud on Instagram for even more. Thanks to the success of his series, Judge has a book coming out next year called Cloud Babies that you can now pre-order on Bookshop.