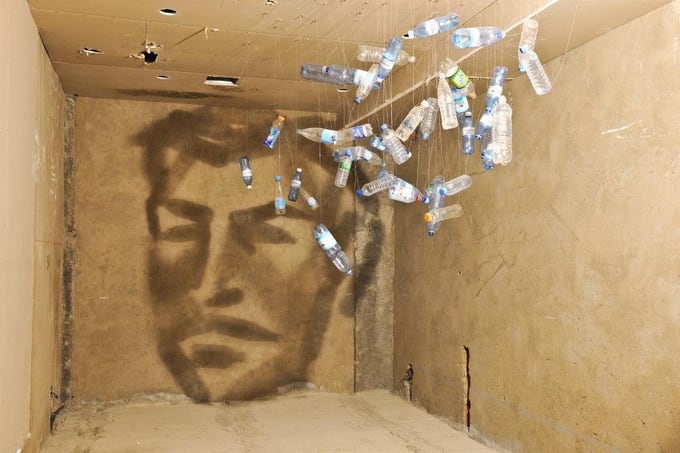 Rashad Alakbarov – contemporary artist from Azerbaijan. He’s creating a picture from the shadows.

Rashad Alakbarov graduated from the Faculty of Decorative Arts at Azerbaijan State Academy of Fine Art in Baku (2001). He has worked with different media, including painting, sculpture, theatrical decoration, video art and architec­tural design, but the use of shadows in his installations has become the main direction in the artist’s conceptual work. The first public showing of this type of work was at the ‘Wings of Time’ exhibition in Baku in 2000. His works are held in private collections in Azerbaijan, Turkey, Italy and Russia.

The works of Alakbarov comprise massive installations, but not the typical kind which are aimed at direct sensory perception – they contain more subtlety. Objects, either diverse or homogenous, are arranged in such a manner that shadows cast on a wall, under proper lighting, have little to do with the image of the initial installation. From this duality lies the magic of his works.

The artist has created a broad range of works within this general theme. Rashad’s shadow work is cast on the surface of walls and includes images of the city as well as mythological and other characters. Exhibitions of this work have included the ‘012 Baku Public Art’ project and the ‘Themis’ installation. ‘Foreword’ and ‘The Other City’ were also significant exhibitions for his personal development. The installations are created with relatively simple objects, such as plastic pipes and metal wires that he collects and uses to construct the installations himself. At the same time, he significantly emphasizes the concept of the Eastern world in his works. Thematically, his recent works are mainly associated with global social problems. With these works, the artist focuses attention on problems and demonstrates that he is far from oblivious towards what is happening in the world today.