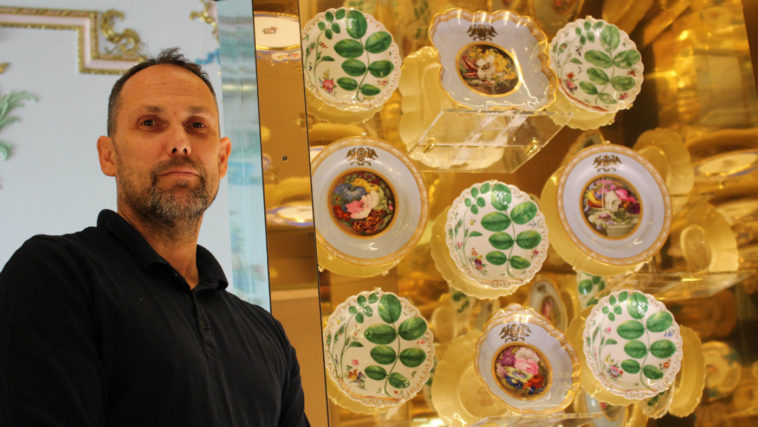 Bouke de Vries was born in Utrecht, The Netherlands and studied at the Design Academy Eindhoven. He also attended Central St Martin’s College of Art & Design before working with some notable designers such as John Galliano, Stephen Jones and Zandra Rhodes. His career took a turn when he went to study ceramics conservation and restoration for West Dean College where every day his work dealt with issues around perfection versus worthiness; what is deemed perfect will never be rendered worthless while an imperfect item can lose its value without being destroyed wholeheartedly like Bouke’s Meissen muse who lost one finger from her collection because it became virtually worthless by comparison.

He uses the skills he learned (c.f. Ron Mueck’s model-maker skills) as a restoration expert and artist to “explode” ceramic artworks. He calls them “the beauty of destruction.” He intentionally breaks his creations, then takes pictures of them with high-speed photography techniques. Instead of fixing his ceramic works, he emphasizes their new status and creates new virtues through this process.

In Bouke’s own words: “ I use clay because it reminds me of how things are formed out of earth. While creating new forms it is important not to be too conscious about beauty but rather about what object wants to become next.”

The more contemplative works echo the 17th- and 18th-century still life paintings of his Dutch heritage, especially those with flower themes. Henri de Heem was inspired by these early masters from Utretch which is where he first started painting flowers. However, as time goes on a new vocabulary evolves through contemporary items like bread crumbs or wine glasses to symbolize decay while simultaneously recognizing that there will always be something else around to take its place in an endless cycle.

By juxtaposing these ‘dead natures’ – natural morts, everyday household objects, such as a plate or milk jug, with one specific aesthetic – that of the vanitas and momentomori paintings from Dutch art history- he succeeds in presenting an installation bearing witness to the loss of these goods.