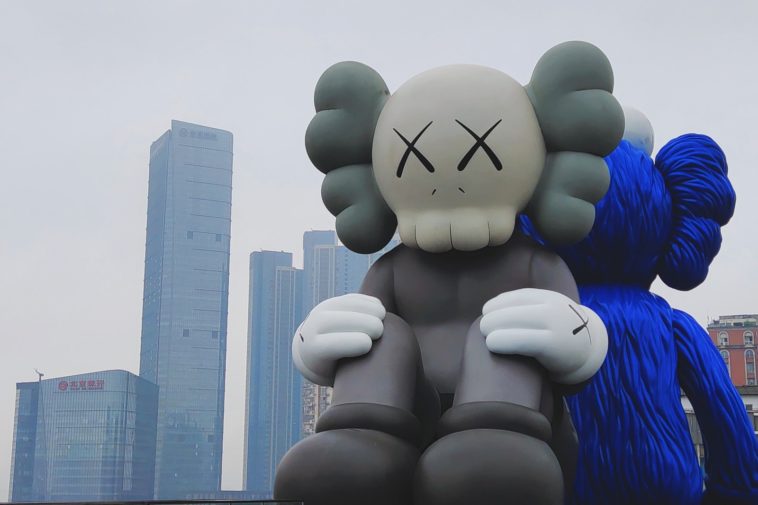 Brian Donnelly, better known by his stage name Kaws, is an American artist and designer who works in the field of graphic design. His work contains a cast of figurative figures and patterns that have been painted over multiple times throughout his career from the 1990s, initially drawn in 2D and later 3Dified.

Kaws creates sculptures ranging in size from a few inches to ten meters tall out of various materials including fiberglass, aluminum, wood, bronze, and a steel pontoon inflatable raft. Andy Warhol, Jeff Koons, and Basquiat are all artists who have influenced ‘Kaws.’ His influences come from prominent classic painters such as Gerhard Richter, Claes Oldenburg, and Chuck Close, as well as Andy Warhol for his cross-market appeal and capacity to blur boundaries between commercial and fine art. His work has been shown in art galleries and museums worldwide.

Kaws is best known for his limited-edition pieces that are often sold out before production is even finished. His most prominent work includes the BE@RBRICK (BE@RBRICK 100%, 2004), which was originally created as a Nike shoe for NIKEiD in 2008. These toys measure 100% to 140%, signifying the amount of the toy that is made out of high-quality fake rubber. Now, these figures are only sold through a lottery for over $1,500.

Other prominent works include his collaboration with Medicom Toy Company in which he designed 6 colorful BE@RBRICK figures called “Kaws Companion”, “Buff Monster” (2010), and his 2011 design for Kidrobot’s Dunny.

Kaws has a studio in Brooklyn, New York, where he makes sculptures, acrylic paintings on canvas, and screen prints. He also works commercially, mainly on limited edition toys, but also apparel, skateboard decks, and other items.