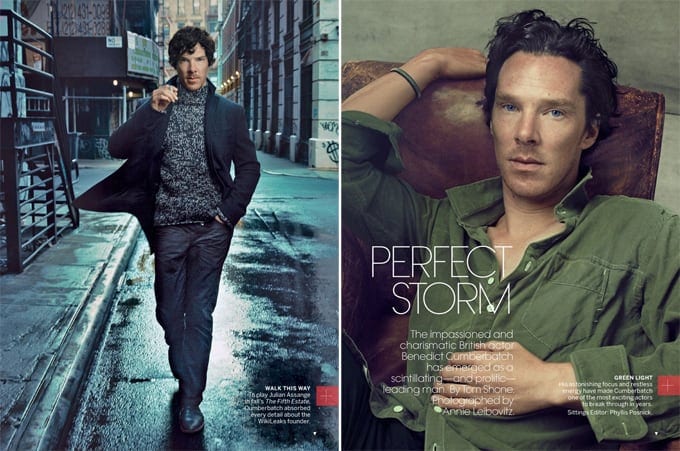 Benedict Cumberbatch has been photographed by legendary photographer Annie Liebovitz for the September issue of US Vogue.

On his performance as Julian Assange: “I thought he should be more… not stiff, but like a guy who does a lot of yoga. It’s that strength where people look weak but their core is strong. He’s incredibly poised. Back straight. His head leans to the side. There’s this thing about him being very reserved and austere. I wanted him to be a little bit more like a rock star. There is something almost boyish – a joy about him. I wanted him to smile.”

He’s an old soul: “Somebody said to me the other day, ‘You’re an overnight success’ – but it didn’t happen overnight,” Cumberbatch says, ordering a beet-and-avocado salad. “Weirdly, when I was young I always wanted to be 32, I just thought it was the age when things would get to that comfortable driving-seat position: a young father, career that was stable. That was the age I’ve always been romantic about. I think I was an old soul. A teacher once compared me to William Blake, which was a little worrying: I never saw visions of angels in trees in graveyards by the side of the road.”

Rebecca Hall on her friend: “His voice mail messages are one of the great highlights of our friendships. They contain an entire conversation. They’re just joyous.”

He was a theater geek and a rugby player: “So everyone was confused – ‘There’s that chap from the rugby pitch, takes his tackles low and doesn’t complain when he comes out of it badly, And oh, look, there he is wearing a wig and prancing around being Titania, queen of the fairies.’ I covered all the bases.”

On Assange’s relationship with Daniel Domscheit-Berg: “There’s an element of seduction, intimacy, and then rejection. They are almost like lovers.”

His relationship with Olivia Poulet (they split in 2010): “It happened very gradually, very mutually. We’re still very good friends. There was no acrimony. I love her, adore her, always will.”