For artist Carly Silverman, taking paint off of the canvas is just as crucial as putting it on. Her artistic process involves placing strokes of paint down and then wiping them away with a cloth to blur the lines of her images and reveal the multiplicity of layers underneath. the gradual accumulation of oil paint washes creates a gauzy, dreamlike environment in which Silverman’s figures are depicted stealing a moment of self-awareness amid the endless bustle of city life.

Using a combination of figurative and abstract painting styles, Silverman captures her subjects in a fleeting moment of time. Perpetually in motion, figures seem to be transfixed by their destinations; their current settings merely passing by, a means to an end. Their blurry, washed out surroundings threatening to disappear behind them serve as a constant reminder of their outside concerns, the unshakeable need to keep moving forward and remain productive, lest they cease to exist. However, amidst the fast-paced commotion of their cosmopolitan lives, subjects are depicted as having found a moment, however briefly, to take pause and remember themselves; the loose strap on their sandal, their hair coming undone.

Silverman manages to find moments of meditation and serenity even in the hectic surroundings of metropolitan life, and brings them to life with a series of brush strokes placed on the canvas and then wiped away, just as the transitory moments captured in her compositions come and go like waves.

Deeply inspired by fashion and the aesthetics of clothing, the garments depicted in her compositions offer hints into the lives and personalities of the subjects, accounting for the absence of facial features. The faces of the women depicted are either turned away from the viewer, or blurred to the point of abstraction. Silverman intentionally omits these details from her figures so that her expressive brush strokes and dynamic configurations, and surroundings can tell the story of the scene for themselves. 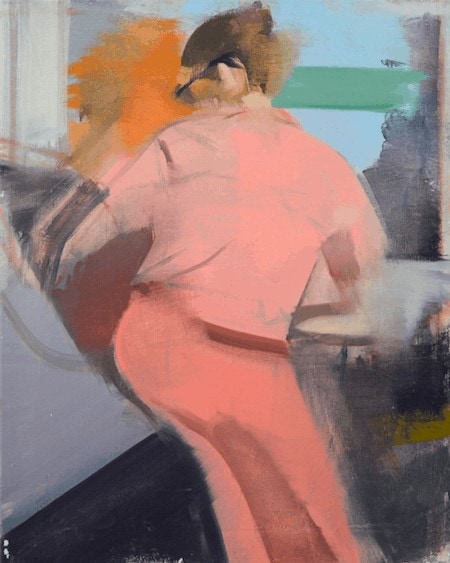 The layers of paint on each canvas echo the infinite layers of culture and stimuli found on the streets of New York, which bleed into each other as they move out of one’s focus and into their peripheral vision. As Silverman’s figures are swept up in the frenzy of their ever-evolving metropolis, small gestures are able to remind them of themselves, that they are individuals as well as faces in a crowd.

Check her work at Bee in the Lion or on her website here.