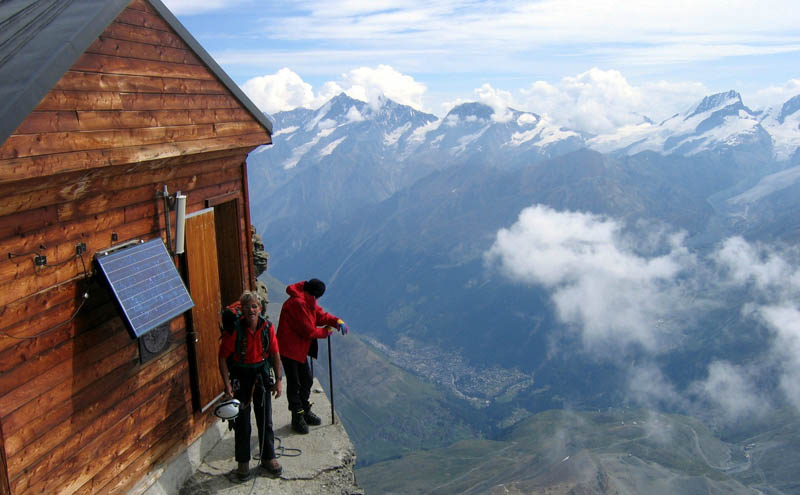 The Solvay Hut is located on the north-eastern ridge of the Matterhorn, near Zermatt in the canton of Valais in Switzerland. At 4,003 meters (13,133 feet) it is the highest mountain hut owned by the Swiss Alpine Club, the largest mountaineering club in Switzerland. Mountain huts are intended to provide food and shelter to mountaineers, climbers, and hikers. But Solvay Hut can be used only in case of emergency. About two thirds up the mountain, 743 m above the Hörnli Hut and 475 m below the summit, many Matterhorn climbers have rested on the small ledge outside the hut admiring the spectacular view of all the Monte Rosa summits.

The hut was built in August 1915. All the building material was brought up to the Hörnli Hut at 3260 meters by the help of animals. From there a small temporary cable car was used to transport the material up to the building site at 4000 meters. The hut was erected within only five days. In 1966 the hut was rebuilt and in 1976 an emergency telephone was installed.

The hut is named after Belgium Ernest Solvay (1838-1922) who donated the well-known hut on the Hörnli Ridge on the Matterhorn as a gratitude for the unforgettable hours he spent in the mountains, and from the realization that occasionally sudden thunderstorms lead to tragedies. Before his alpine career began after retirement, Ernest Solvay was an inventor and businessman who invented the industrial process for sodium carbonate production, from which a worldwide undertaking resulted.