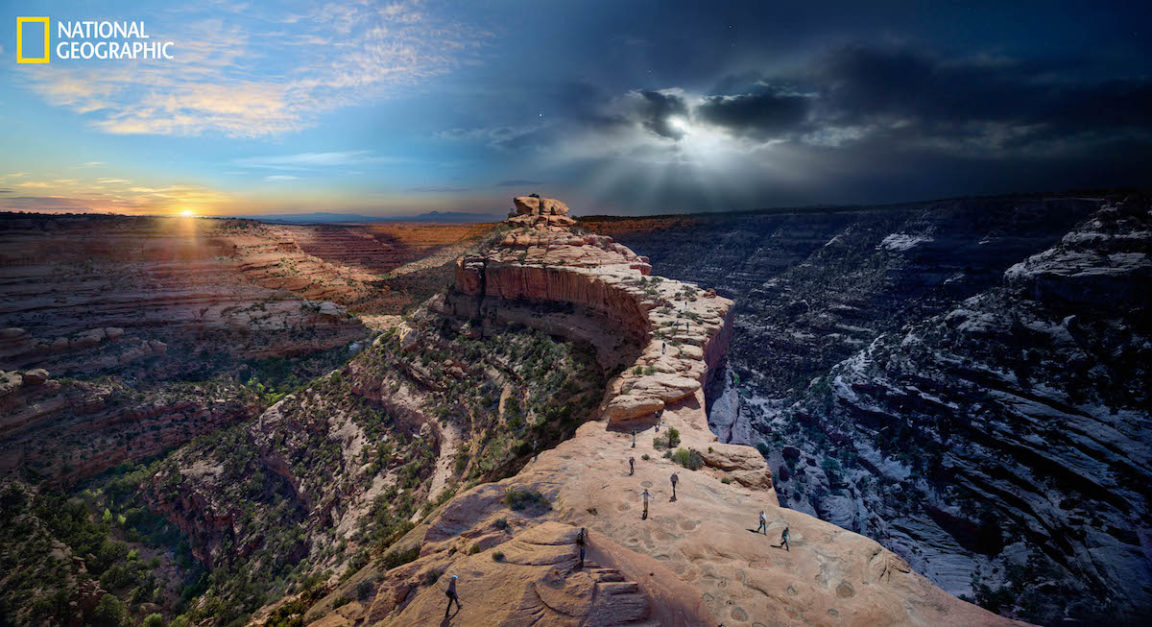 This spectacular landscape is a symbol of the risk to some of the country's unique and irreplaceable places. One president preserved it at the urging of Native Americans who hold it sacred; another tried to open it to drilling and mining. A national monument rich with human history, it includes the Citadel, once a fortified cliff dwelling, now a popular hiking spot. Stephen Wilkes took 2,092 photographs over 36 hours and selected 44 to make this image, capturing a sunrise, a full moon, and a rare alignment of four planets. “This was to me,” he says, “as beautiful and as magnificent as any spot I've seen in the Grand Canyon.” (Photo: Stephen Wilkes, National Geographic)

Stephen Wilkes, a photographer for National Geographic, took pictures of some of America’s most beautiful scenery. His “day to night” photography showed everything from the sun rising to the moon in one frame. His nature-themed images have been featured on the front cover of National Geographic to show readers how America needs to change its habits to preserve wildlife better.

Wilkes took one of his most impressive images at Bears Ears National Monument in Utah. The 36-hour photo shoot demanded that Wilkes and his team hike for an hour while carrying 75-pound packs of equipment on their backs. On top of that, they had to battle 50 mph winds once they arrived at the location, which made it even harder to set up their gear. This image conveys the grandness of America’s landscape and how the light transitions throughout the day. It invokes feelings of awe and wonder!

Wilkes chose Bears Ears’ famous Citadel as the centerpiece of his image, with day and night evenly balanced on either side. A group of hikers can see their way below toward the cliff dwelling. Although it appears tranquil, much careful research goes into creating these images.

Wilkes planned his shoot of Bears Ears to correspond with a rare planetary alignment that only happens once every 33 years. This timing coincided not only with Easter Sunday but also Passover and Ramadan- which was perfect given the monument’s religious significance in different Indigenous cultures.

Wilkes describes the event as an otherworldly experience and a spiritual connection that makes one think back to ancient cultures—especially Indigenous culture. He explains how these civilizations translated what they saw in the stars into their everyday lives.

Bears Ears National Monument, located in the southwestern United States, represents the country’s longstanding environmental issues. In 2016, President Obama bestowed national monument status upon Bears Ears; however, Trump lessened its protective boundaries just one year later. Utah is now embroiled in a legal conflict with President Biden over his attempt to return the monument to its original 1,351,849 acres.

Wilkes believes it is vital to contribute to National Geographic’s September issue, which focuses on the battle for America’s natural resources.

“It’s becoming more and more challenging to convince people of scientific data,” he says. “It’s the artists’ job to tell stories that evoke certain emotions in people, so they feel connected to the message, which drives them to take action .”