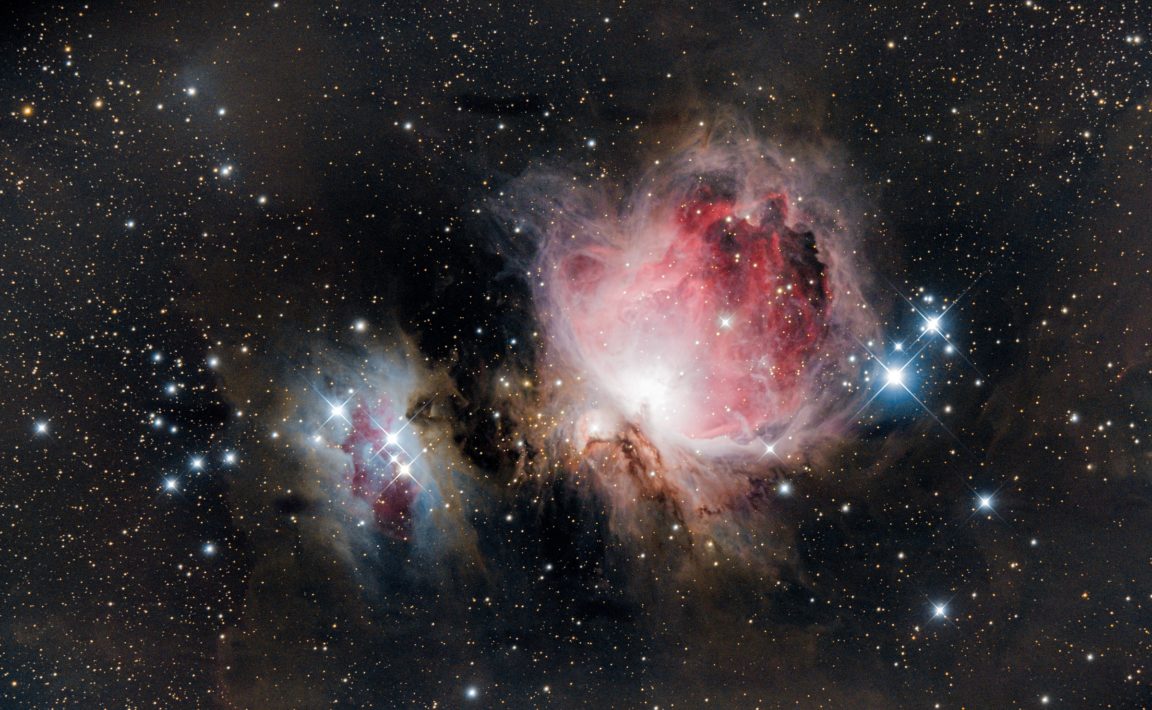 The 12th largest constellation, belonging to the 12 constellations of the zodiac. The constellation of Leo in early March towers around midnight at a height of 55°. You can find it with the front wheels of the Big Dipper, extending the distance between them ten times towards the south. The brightest star in the constellation Leo is Regulus. Near Lion’s head is the radiant of the Leonid meteors, whose maximum activity is between November 17 and 18. Then, with a cloudless sky, you can enjoy a romantic star watching up to 60 “shooting stars” per hour. Unfortunately, no swarm radiates in March with a degree of activity even close to that of the Leonids.

Interesting objects visible in the background of the constellation Leo are also the galaxies M65, M66, and NGC 3628. They are located in the sky close to each other and can all be seen at the same time within the field of view of the telescope. That is why they are called the Leo Triplet. Similarly, in the background of Ursa Major, you can observe very interesting galaxies M81 and M82, but we will tell them about them another time. Leo’s triplet is made up of spiral galaxies, seen at an angle that allows photographs of their spiral arms, while NGC 3628 appears in the plane of the galactic disk. This allows astrophotographers to show the dark gas and dust of NGC 3628’s spiral arms against the bright galactic center and thereby make similar observations that each of us makes when we see the Milky Way in the sky. The constellation Leo is one of the zodiac constellations, i.e. those against which the Sun shines during the year.

It is a constellation associated with the lion already in the Sumerian and Babylonian cultures. According to the Greek mythologies, the constellation seems to be the Nemean lion. The lion was killed by the hero Heracles. To kill a Nemean lion was a miracle because its skin could not be pierced by an arrow. According to mythology, Hercules used a trick, caught the lion in a net, stunned it with a club and strangled it, and made a cover from its skin. What mere mortals failed to accomplish became Heracles’ glory. In recognition of his merits, the gods placed the defeated lion in the sky to remind people of the heroic deed of his victor. Unlike most zodiacal constellations, Leo is quite easy to see in the star system, because he rests with his head raised in a pose somewhat reminiscent of the Egyptian Sphinx.

The Egyptians, on the other hand, associated the constellation Leo with the onset of summer, when Leo is highest above the horizon in the evening. During this hot period, their country reminded them even more of the desiccated savannah, the kingdom of the lion.

Regulus is the brightest star in this constellation. This star once belonged to the four guardians of the sky, symbolized by the Regulus, Fomalhaut, Aldebaran, and Antares, known as the stars royal. They divided the ecliptic into four parts, the seasons. In this order, when the Vernal Equinox was still in the constellation Aries. Since Regulus is almost on the ecliptic, it is often conjunct (opposed) to the Moon or planets. Regulus is a hot star with a high surface temperature and emits 164 times more radiation than our sun. The Arabians call Regulus the royal star and attributed it to his authority in the sky. In Europe, until the first half of the 16th century, the Latin word for the Arabic name, Rex – king, was used. Only Copernicus called the star Regulus, that is, a diminutive form of the word rex, which can be translated as a little king.

Denebola is a star with an average surface temperature of about 8,000 Kelvin. The name of the star comes from the abbreviation of its original Arabic name Danab.

Algieba – a double star that can be seen in a telescope. It is an orange-colored giant. Another yellow giant runs around it in 618.6 years. We can see this system with the unaided eye at a distance of 172 light-years. The name is derived from the transcription of the Arabic, i.e. the forehead, which does not exactly correspond to the position of the star in Lion’s image, as Algieba is rather in his mane.

Zosma is a white star 82 light-years distant. The star has such a name because of Greek origin, in translation it means a belt, so it does not fit well with the star which is located at the back of the lion’s image, near its tail.

Ras Elased Australis – its light runs to us for 1600 years, and the name was derived from the original Arabic, that is the southern star on the head of a lion; Latin australis means southern.

Adhafera – a star about 362 light-years distant, whose name comes from the Arabic word al-dafara – dimples behind the camel’s ears.

Subra – A binary star that is 116 light-years distant. An invisible companion circulates around the main ingredient within 14.5 days.

A great attraction related to the observation of the constellation Leo is the unusually abundant November meteor shower – Leonid, which is a remnant of the Tempel – Tuttle comet. The peak of this swarm is around November 16. The earth passes through it for four days. In 1966, the Leonids were observed in the form of a meteor shower with a number of 144,000. Phenomena within an hour. You can buy your own star, using the star gift option. This will be a real star of your choice, that will be well visible from any place all over the year.