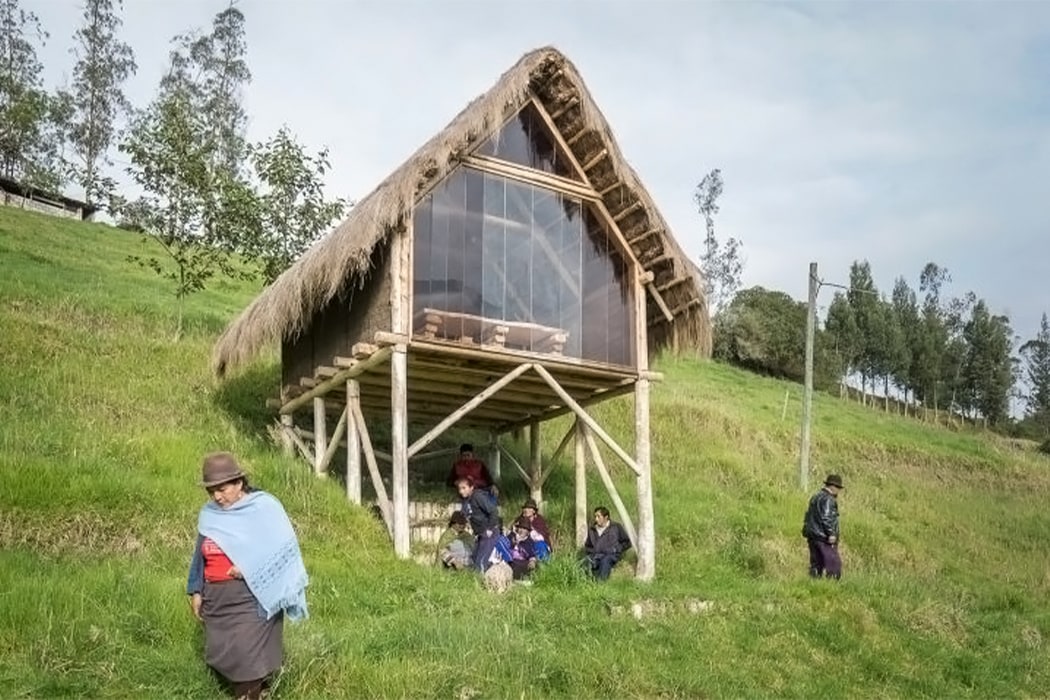 An architecture student David Guambo made Kusy Kawsay, a tiny hut housing that rests in hilly pastoral Ecuador with a wood framing and straw roof. Kusy Kawsay in direct translation means “passionate life” in Kichwa (Quechua dialect, a language used in the region of Andes), and this small hut is a perfect reflection. This studio‘s idea followed a desire to have a space to do projects while listening to loud music—a shared passion amongst students. Guambo, to build his dream asylum, worked under an experienced hand of Al Borde, a local architecture office that completed the renovation of a decayed 18th-century house in Ecuador with success.
The main goal was to play music without restrictions and not disturb neighbours, so young students used a traditional installation known as “Bahareque” – a building system that was built using mud and weaving stick to create compact walls to make it soundproof.
Despite the exterior reflecting the traditional design technique, thanks to the full glass window, there is a modern touch. The studio has a gabled roof, layered with grassy straw. Dried mud between wood framing helps it to make it sturdy. One of the most appealing characteristics is the playful triangular window in the studio’s front that allows plenty of sunlight in, giving you a view of the natural landscape at the same time.
The crisscrossing timber boards turn it into a studio on braces, and there are cut-up wood trunks form numerous rows of bench seating below the section where passerby can sit in the shadow for rest. The interiors are warm and straightforward, the floors covered with wooden planks and the exposed roof. Minimaliscitally furnished with a timber desk, placed in front of a big window along with a chair. As the young and resourceful designer says, “I’m making a study room, with wood, straw, and everyone made fun of me because I am constructing with a traditional system. This is because we don’t value what we have, they prefer to do foreign things, thinking that they will save money.” He believes that they don’t know that one can reinterpret what you already have and create something new. He hopes that he will change the mentality of people, thanks to this project.