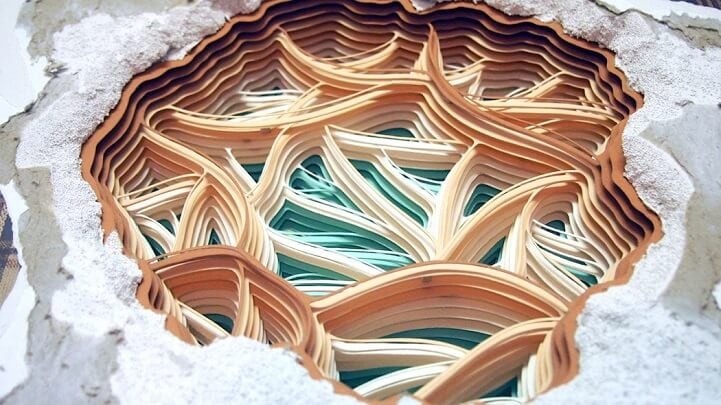 Charles Cray provides an unusual perspective on the world, using layers and layers of accurately carved paper to communicate his vision. His unsettling microcosms call to mind words such as ooze, growth, and spread. These associations are designed as Cray draws inspiration for his pieces from concepts such as sound waves, fungus cultures, and microbial diseases. Garish colors invite synergies between his work and audience, where one may intrinsically withdraw for fear of infection.

Clary has stated that his art serves to “explore the constant ‘growth’ of installations, which, if left alone to gestate, will eventually take over entire spaces, infesting every surface they touch.”

His series featuring paper constructions tucked beneath coats of wallpaper is made to resemble computer-generated sound waves or petri dish samples of viral colonies. With a sense of layers being peeled back from the surface of an alien body, Clary’s meticulously arranged works contrast beautifully with the disintegrating exteriors.