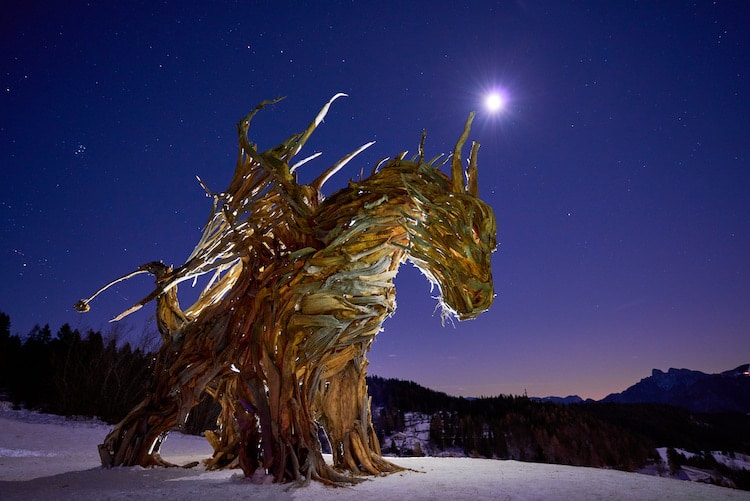 When sculptor Marco Martalar saw the damage done by a recent storm, he was moved to create something beautiful. The dragon he carved from the trees that the wind had scattered is a magnificent sight and has become a symbol of Mother Nature’s power. Situated atop a mountain in the Trentino region of Italy, this dragon sculpture is awe-inspiring and celebrates the triumph of nature over destruction.
The Vaia storm wreaked havoc in northern Italy in 2018. Winds of up to 125 miles per hour leveled a vast forest. Over 18,000 trees were destroyed in Trentino alone due to the severe storm, which was unrivaled. Vaia had a significant impact on Martalar, altering his perspective on art. “Before, the sort of sculpture I was producing no longer made sense,” he explains to Freeyork. “So I utilized what the storm had destroyed and given new life as art to create something new.”
The dragon found on the Alpe Cimbra in Lavarone is a significant symbol. Martalar interprets it as a metaphor for nature’s strength and what may occur when nature is neglected. He spent ten days planning the operation and dedicated a month and a half to on-site sculpting to construct the work.
The dragon, however, was Martalar’s most magnificent creation from the fallen wood. While he has moved on to other endeavors, his dragon has become a sort of neighborhood sign. It stands as a reminder that we should never take Mother Nature’s strength for granted, as others pose with the dragon and snap photographs of it covered in snow.