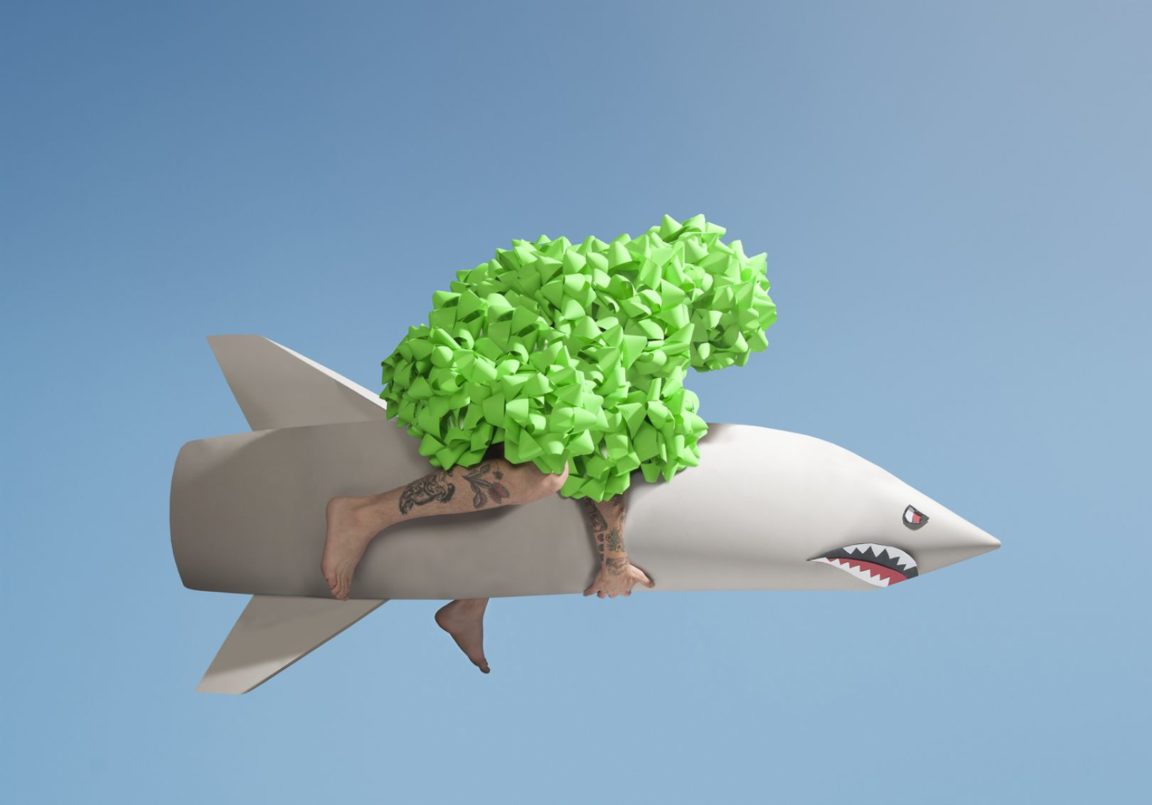 Fashion is a very serious topic. Gerwyn Davies knows this, and he also knows that it’s not always about wearing the most expensive clothes or being on-trend. Sometimes you just want to have fun with your style choices—and Gerwyn does exactly that with his costumes! Using readymade materials like toilet paper, Gerwyn creates his own characters through excessive and playful costumes that conceal, transform, and abstract his body before photographing these highly stylized transformations in different locations around the world. You could say Gerwyn’s work forces us to reflect on our clothing choices every day by reminding us of the narratives we construct for ourselves.

His favorites are Osaka I (2018) and Adonis (2019) for “completely opposite reasons.” He adds: “Osaka I was a work I made while on an Australia Council residency in Japan and the costumes and figures were imagined in response to the built environment. This particular structure is a public square that sits next to the train station, and it is also a children’s playground, there is a trampoline that sits on top of the structure.”

“It was searingly hot, the sun was bouncing around the white cement, and the whole space was crawling with ecstatic children. Adonis, however, is entirely staged in the photographic studio which is a really pleasurable way of working in which you can methodically construct the environment within a space that is fixed, and you have complete control over. The process of making both these works was really satisfying and that all comes back when I look at the final image.”

Gerwyn spends a long time sewing the costumes. “I adore every step of creating the work from procuring raw materials through costume construction, staging the figure for the lens, and postproduction, but each requires its own set of skills,” he adds. “Costume creation is most rewarding in my opinion, and it’s a very different type of labor to sewing for others. As a designer, I hate the idea of restricting someone’s body or appearance through an outfit, which is why my costumes are designed with such exaggeration and excess in mind.” Gerwyn believes that clothes shouldn’t be there to make you look good; they should be “a tool” used to express yourself!

“It feels like the joy of this process comes from being so distracted by a small repetitive task – reshaping readymade plastic objects to form part of the fabric of the costume – that you don’t see that this loud and excessive figure is slowly materializing in front of you. It’s a little Dr. Frankenstein and a little Liberace. There is always a degree of disconnect between my projected intentions for the materials and how the costume ultimately looks as well, so there is a pleasant element of surprise for me in this as well.”