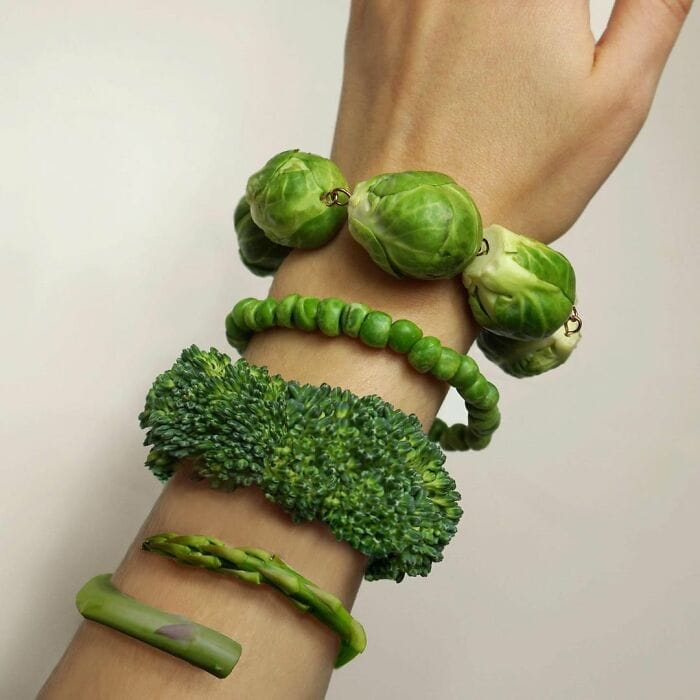 Fashion is an inevitable part of any culture, and fashion has been around for so long that it’s hard to pinpoint just how old fashion as a concept and phenomenon is. But fashion, too, has been around for so long that it’s becoming increasingly harder to come up with something new, fresh. Enter Gab Bois, a Montreal-based artist who has successfully reinvented fashion using everyday items. Her ingenious ideas are featured in the curated list below, along with an interview with the mastermind herself!

Gab Bois is an artist that defamiliarizes what we see around us. She takes a mundane item, such as keys, for example, and turns it into something extraordinary with her photography skills. She captures the ordinary object from another angle or perspective to make it look like a designer accessory.

This artist creates a “surreal” experience with her artwork. She dreams and has an active imagination! Using everyday items such as bananas, skulls bowls, bras & purses, this creative person makes everyday life seem like something out of the Twilight Zone!

“I have always loved fashion, and I was able to practice my passion as a child. One of the most memorable times in teaching myself how to sew came when I turned corn cobs into doll dresses with my mother’s help. Afterward, we would make flower necklaces for our neighborhood cats so they could be fashionable too!” Bois explained.

“I was always an only child, so I had to find ways to keep myself entertained. One of the things that took off for me in my childhood is crafting; this has translated into what I do today, and not a day goes by without some kind of craft on my desk or around my house.”
“The process starts with an idea. Sometimes, it comes on its own without me even thinking about it for inspiration, but other times I have to plan and think of what I want to create.”

“Then, production: It can take from 15 minutes up until several days depending on the complexity of my ideas or whether they’re executed correctly at first try if not then post-production is needed which also varies in time consumed (and) level of difficulty – always trying as much as possible though so that only minimal editing work has been done once finished instead.”

It’s never easy being an artist and the challenges of their work are no exception. A multitude of things can happen during a project, from just plain bad luck to personal struggles that make working on it almost impossible. For Bois, it’s when her art gets in its own way. She talks about some of those challenges:

“When an image I thought would look a certain way doesn’t turn out that way, it can be the most challenging part of trying to make something from scratch. It is difficult enough having ideas in my head and then translating them into three-dimensional objects or sets. Still, when they don’t come out exactly as planned (which happens more often than not), I get frustrated with myself for getting what seemed so perfect on paper wrong.”

“It’s always frustrating when your idea isn’t readily understood, but I’ve learned that it makes me more creative and resourceful. It inspires me to think outside the box rather than just rest on what has already been done before.”