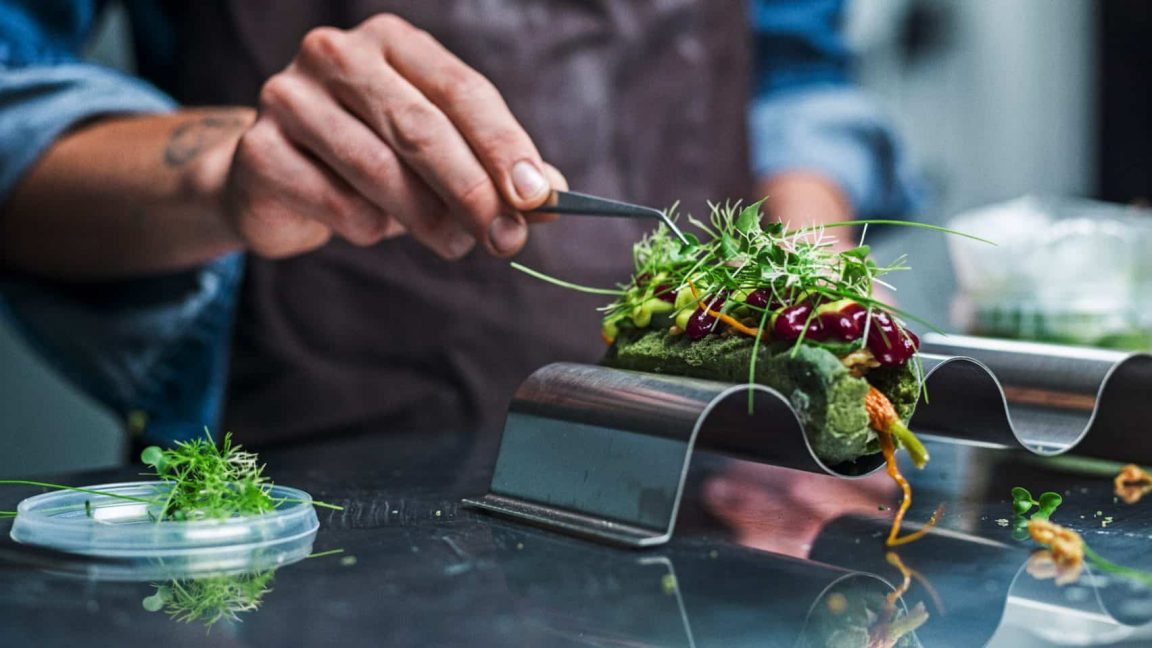 A burger containing mealworms and a hot dog made from dried carrots and algae are among the most recent futuristic foods produced by Space 10, the research and innovation lab directed by IKEA.

Two years later showing an assortment of meatballs that may be consumed by future generations, Denmark-based Space 10 has invented a menu of five new dishes that could supply the answer to the called global food crisis.

As well as the unconventional burger and hot dog, the menu — which was introduced at a conversation during this season’s DesignMarch at Iceland — it includes a salad and an ice cream produced from leaves grown in water, and two new meatball dishes made from ingredients that were surprising.

“At Space 10 our research is rooted in an important principle — dishes shouldn’t only be sustainable or healthy, they need to be delicious too,” clarified Space 10, that counts food designer Simon Perez and plant engineer Sebastian Dragelykke among its diverse team.

“That’s why we’ve been working together with our chef-in-residence to produce dishes which look good, taste good, and so are good for people and planet.”

“It’s time, then, to place a few of those dishes on the menu, beginning with a lively take on our favorite fast food.”

The project was first initiated in response to UN study, which predicted the planet’s demand for food would increase by 70 percent over the next 35 decades, and drew attention to the environmental effect of meat production.

Consequently, all the future foods which Space 10 has created are made with components that can be cultivated sustainably, or are byproducts of a present production chain.

The Dogless Hotdog includes a vegetarian sausage, made with baby carrots that have been dried and glazed.

Other components include ketchup made from beets and berries, a cream made from mustard and turmeric, roasted onions, cucumber and a herb salad.

The Bug Burger contains a patty made beetroot, parsnip, potatoes and mealworms, which are the creatures of the common darkling beetle. According to the designers, it is a bigger version of this Crispy Bug Ball meatball.

The two new meatball dishes, also known as The Neatball, are made to attract equally meat-lovers and vegetarians. The first contains balls made out of mealworms, while the next is ready from a selection of root vegetables.

The salad on the menu, also known as Lokal Salad, consists of microgreens — miniature sprout-like plants with a brief shelf life, which Space 10 has been exploring for a while today, and has showcased at different design occasions.

These microgreens are typically utilized to cut off food, but Space10 found that the root, seed, and take of those tiny plants are packed full of nourishment, and they can easily be cultivated at home.

The final addition to this menu is the choice of ice creams, all made from microgreens. Choices include coriander, fennel, basil, and mint. There is also an ice lolly option, made from herbs such as coriander, woodruff, sorrel and Spanish chervil.

IKEA launched the Space 10 laboratory at the end of 2015, to research ideas which may influence the houses of the future.

The group works out of a research hub in Copenhagen and has produced an assortment of innovative ideas, including a four-meter-high bioreactor dome for growing microalgae.

It is their food products that have caused the biggest stir so far. Nevertheless, IKEA customers will not have the opportunity to check the results anytime soon. According to communications director Simon Caspersen, there are currently no plans to place these dishes on the menus instore.