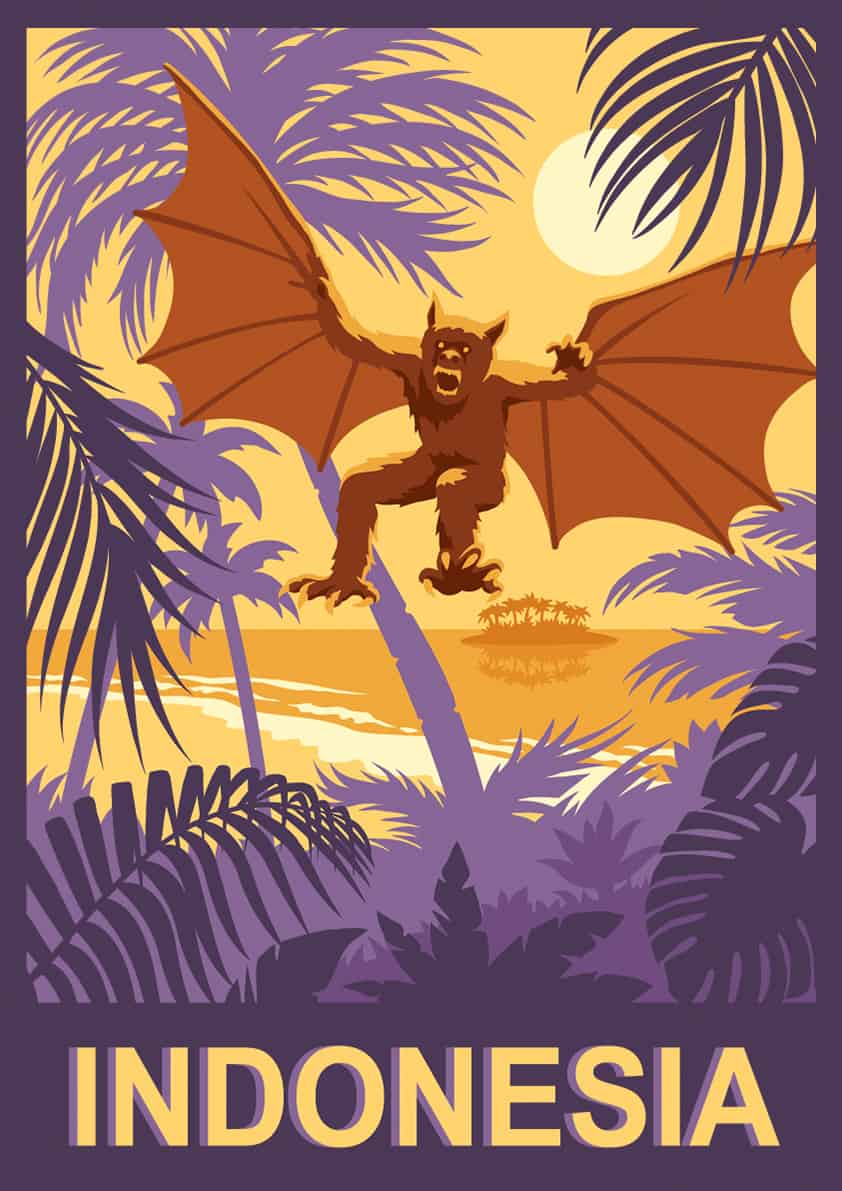 While myths and legends are tales of heroes, monsters, and fabled creatures, they’re also a glimpse into the richness of culture and the history of a country.

Inspired by the thin line between fantasy and reality, GoCompare Travel Insurance has designed a series of travel posters illustrating nine countries according to their mythical creatures.

From the well-known American Bigfoot to the terrifying Japanese kappa, these posters are set to inspire travelers across the globe.

Most commonly found in the forests or mountains, Bigfoot has dark-colored fur and stands at approximately nine feet tall. Travelers have previously tracked footprints of the giant ape-like creature and captured blurry photos. Could you be the one to capture the image that puts all nay-sayers to shame?

A type of water imp, the kappa resembles a human child with reptilian features. It has webbed feet that propel it through the water, and a membrane on top of its head that’s filled with water and provides its life source.

However, this isn’t a trip for families with small children, due to the kappa traditionally feasting on human offspring.

Teeming with myth and legend, Snowdonia is the site of many a Welsh tale so you never know what magic you might encounter in the shadows of Wales‘ highest mountain. However, be careful where you tread and bear in mind the phrase ‘let sleeping dragons lie’. A king once ignored this advice, and awoke two dragons sleeping under Dinas Emrys, provoking a vicious battle between the two.

In the mountain-areas, away from human dwellings, lurk Sweden’s trolls. A common feature in Scandinavian folklore, trolls are a dim-witted, slow and lumbering species that tend to live in isolation as they’re described as ‘rarely helpful to human beings’.

If you want to avoid these creatures, visit on a sunny day when they’ll be hiding from the sun, scared of turning to stone.

Rumored to be the original unicorn, the qilin is a combination of a range of animals, but most closely resembles the traditional Chinese dragon. A gentle creature, the qilin floats above the ground to avoid trampling any living creature.

In Antrim, Northern Ireland, you’ll find a 60 million-year-old UNESCO World Heritage Site which has proved popular with many tourists over the years. Home to an ancient but mighty giant, Finn McCool, the unusual rock formations that formed during a fight between Finn and a Scottish giant need to be seen to be believed.

If you’re out and about in rural Ireland and strange things seem to be happening around you, you could be in the presence of a leprechaun. It’s rumored that if you catch one of these faeries you’ll be granted three wishes. We wouldn’t advise it, as the mischievous creatures are hard to catch and you could find yourself falling foul of one of their many tricks.

Life itself is said to have sprung from a peak located in the mountains to the west of the island and central Moluccans consider it to be their ancestral home, calling it Nusa Ina or Mother Island. Visitors to this island can expect a wide range of wildlife, and may also have the opportunity to visit indigenous minority tribes such as the Nuaulu.

A warning to those wishing to visit this island with children. The orang-bati is a winged animal that is said to inhabit the area and is known to abduct children and carry them off to its home in Mount Kairatu.

While the chupacabra poses no risk to humans, it gains a bad reputation for its feeding habits – attacking and drinking the blood of livestock, with a particular fondness for goats.

The size of a small bear, you’ll recognize the chupacabra by its reptile-like appearance and rows of spines down its back.

The creatures that could really add an extra dimension to your visit are much more elusive and difficult to find. Head to the base of Howick falls, a waterfall in KwaZulu-Natal Province to find the Inkanyamba. A huge serpent with a horse-like head, the best time to catch a sighting of the creature is during the summer months when it’s rumored that its anger causes the seasonal storms.

A creature to be avoided during your trip is the impundulu or the lightning bird. Said to be a companion of witches, it’s a large bird that can conjure storms with its wings. It’s described as a vampire-type creature, due to its insatiable appetite for blood.