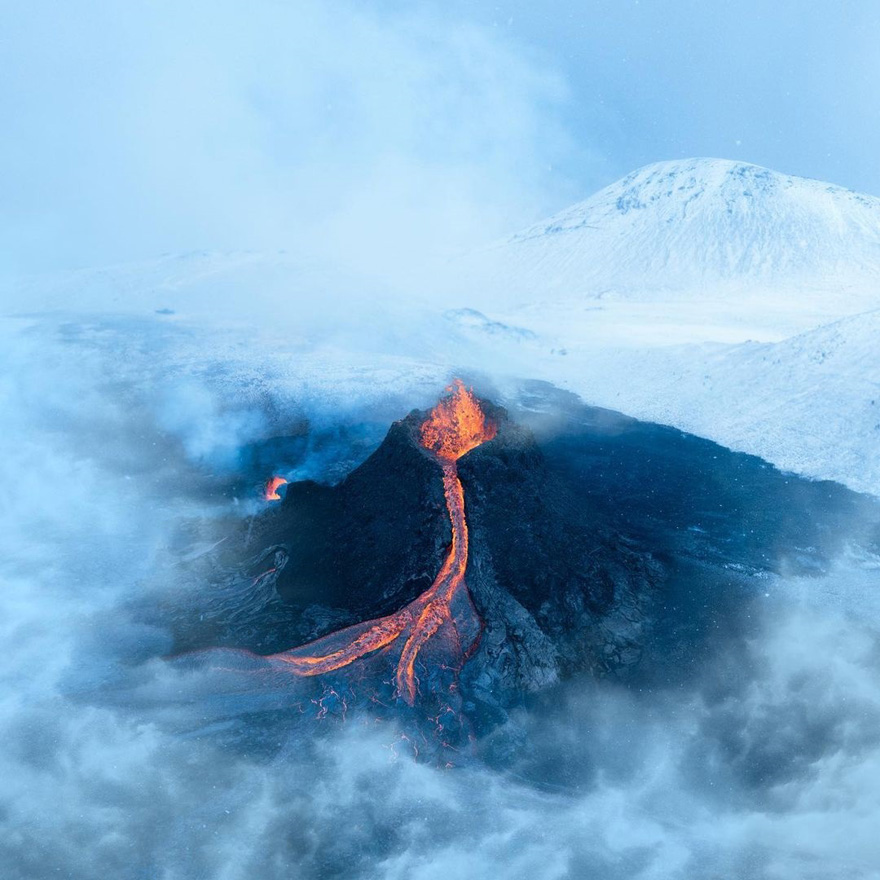 Volcanic activity is both terrifying but also beautiful- something few people get to see on Earth first hand with only two week’s worth of unprecedented volcanic eruptions near Reykjavík this month alone by what had been considered an extinct volcano since before humans existed.

Stéphane Ridard was fortunate enough to witness the world’s newest volcano. When Stéphane arrived, there were no other people around, and he got a rare glimpse of one of Earth’s most fearsome creations in all its glory before it became too dangerous for him to stay any longer. The photographer captured some incredible images that show how frighteningly beautiful volcanic eruptions can be, including pillars of fire reaching thousands of feet into the sky as they light up soot-covered snow banks or steam hissing from geysers against an ominous black backdrop.
The talented director shot stunning aerial footage of molten lava bursting from the volcano’s summit and flowing down it in brilliant streams before cooling into inky volcanic rock. The resulting short film, “Stranded,” is a testament to his ability as well as an ominous warning for future generations about impending natural disasters that threaten our planet’s fragile ecosystem.

Incredible footage of an Icelandic volcano by director Ridard is a mesmerizing representation of volcanic forces. The film, accompanied by spellbinding music befitting such surreal views, captures but a fraction of the entirety and explosive activity; after six millennia, Fagradalsfjall has awoken to start spewing lava once again on March 19th, 2021. It is still emitting fresh lava; in fact, an entirely new fissure vent opened to release its fiery molten contents not too long ago – April 17th was where that happened! One can only imagine how much longer this event will last after 6 thousand years without any volcanic activity whatsoever.

Scroll down to see the fantastic work of Stéphane Ridard. In his latest film, “Stranded,” you will experience Fagradalsfjall’s breathtaking eruption for yourself. To view more of his impressive works, visit the director’s website or follow him on Instagram now!