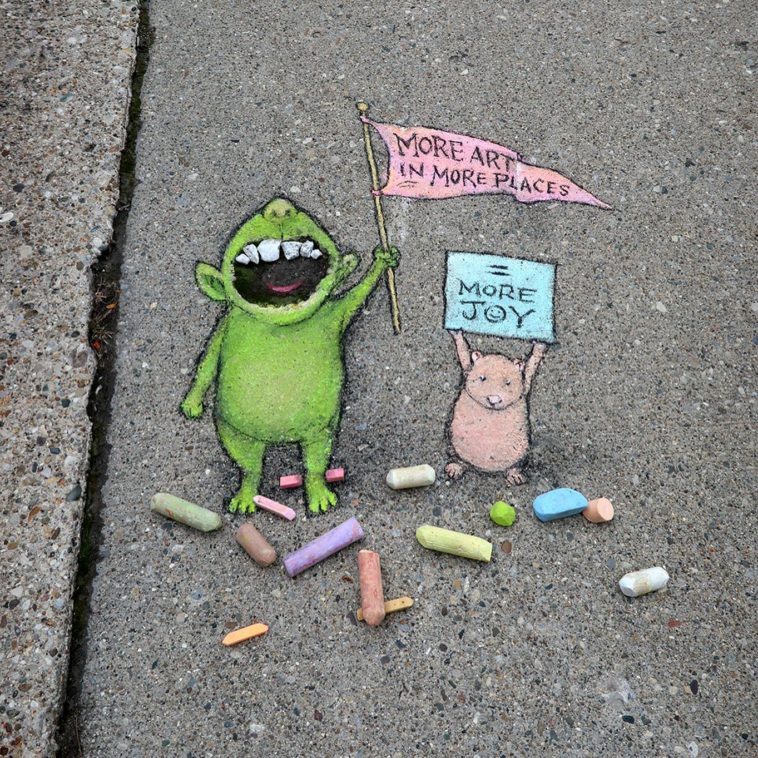 If you’re ever in Ann Arbor, Michigan, be sure to keep your eyes peeled for the chalk art of David Zinn. The artist’s unique illustrations can be found on sidewalks and brick walls all over town. His whimsical characters and animals are drawn in a cartoon-like style that is instantly recognizable. Whether he’s incorporating real-life objects into his art or just using vibrant colors, David Zinn’s chalk art is always a treat to see!
Each looks as engaging with its surroundings, cleverly created to appear as if it is interacting with the environment. The sprinkler head in the background serves as a green frog’s right eye in his drawing of a leering amphibian. On one side, a tiny pink rabbit in a tutu stalks across the pavement as though it were a tightrope. These decisions not only bring Zinn’s work to life, but they also introduce some of his fantastic inspiration into the real world.
Zinn’s artwork stands out thanks to various techniques, including perspective. Many of his pictures appear to have three-dimensional depth, creating the illusion that they are cartoon doors. Zinn draws a square of the sidewalk in one scene, for example, to make it appear that it leads into a blue sky and a pig is flying out. In another, he depicts over a brick to give the impression of a tiny mouse living within and looking outwards. His pictures are more enjoyable to look at when he includes these little details.
Zinn has a new book out called Chalk Art Handbook that contains all of his “tricks and secrets” and how to draw like Zinn. It’s now on sale at Bookshop. Check out Zinn’s online store if you’d like to get more from him.