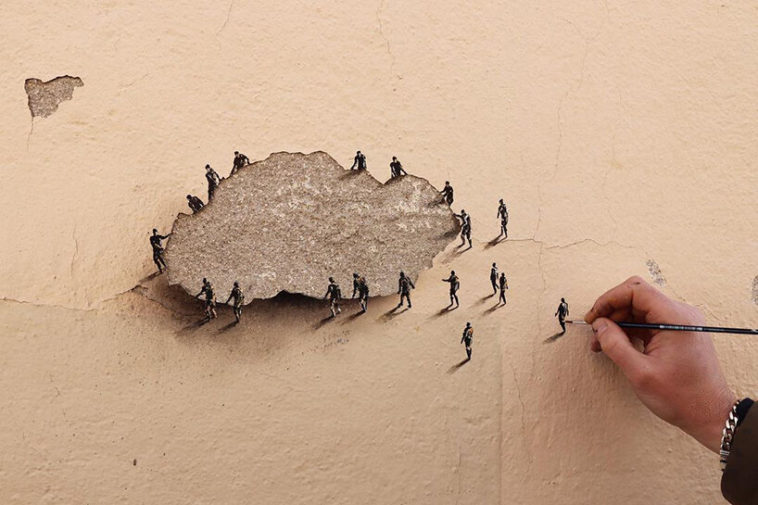 Do you ever stop to look at the walls around you? If you’re in a city, there’s a good chance that they’re covered in street art. If you’re fortunate, you might come across Pejac’s intervention. His latest project, ‘Everything Is Relative,’ can be found in Madrid, Spain. Using casting shadows and tiny figures, he brings life to the peeling wall of the VETA gallery. Take a closer look, and you’ll notice a story playing out in front of you.

Pejac’s work has a way of finding significance in places that appear to be purposeless. Also, his most recent minimalist piece in Madrid’s Carabanchel neighborhood demonstrates this. ‘Everything Is Relative,’ which was charged with surrealism, brings these desolate areas back to life, as does a voice narration if you look closer. A chain of tiny silhouettes works to tug bits of the wall in a collective and organized manner. As though they were precious things.

The creator ensures that the ‘canvas’ is maintained in its original form to draw attention to what already exists.

Pejac’s work encourages passers-by to look at these patches of damaged paintwork with pride and a new perspective. ‘Maybe it’s his way of praising the neighborhood’s history and inhabitants for what is real.’