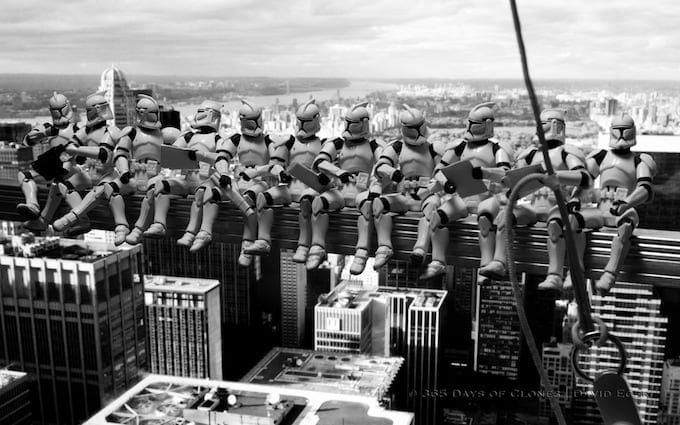 David Eger, a Canadian teacher, has a project on Flickr called “Cloned Photos” that uses “Clone Troopers and other Star Wars characters to recreate important and historical images” (it’s a sequel to another project, 365 Days of Clones). He sells various products based on his illustrations at Redbubble and Society6. Many of these are inspired, including American (Galactic) Gothic, (Cloned) Guernica, Troopers atop a Skyscraper, Iwo Jima and The (Cloned) Kiss.

Eger posted many of these on the anniversaries of their source’s original publications: “The original Cloned Photos from my 365 Days of Clones were created, taken and edited on the same date as the original photograph or on the birthday of the photographer or artist who created the image. There were; however, many images that I missed, didn’t have the time to create or hadn’t thought about that I have now begun to go back and create in my new series.”