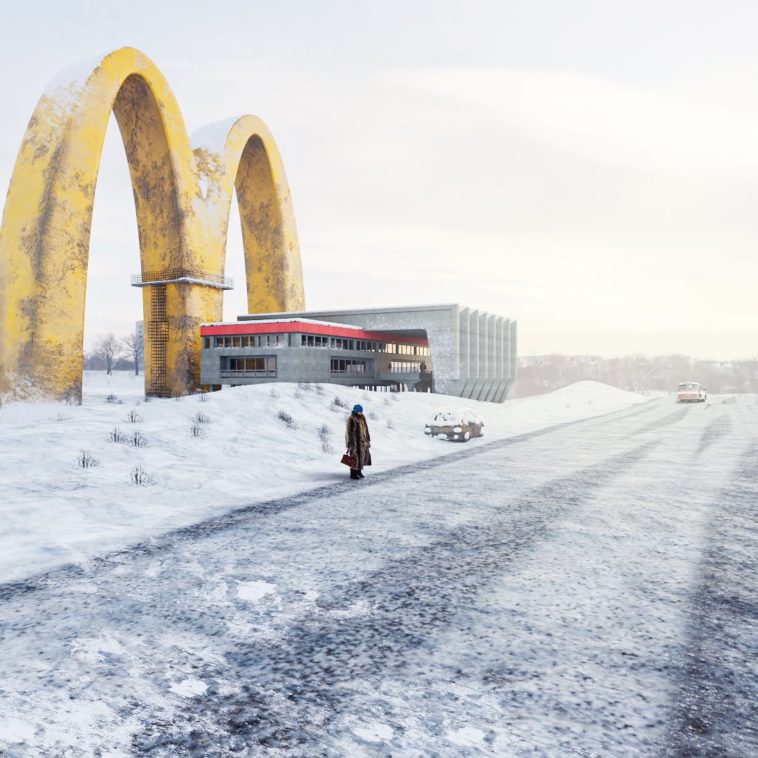 What would Western icons look like if they were shattered and embraced by the east? It’s a dystopian, brutalist environment where immense structures stand out because of their extensive brand recognition. Quin Wu, an architect from New York, creates a unique perspective with digitally painted portraits of cultural icons being worshiped. Wu reimagines well-known logos and brands in this series as towering structures that loom over landscapes inspired by eastern aesthetics.

‘The contradiction between a centrally planned economy and a market economy astounds me,’ said Quin when describing the purpose of his labor.

Quin Wu was born in China and educated at the Rhode Island School of Design, where he noticed the distinctions between eastern and western nations. ‘I came across some photographs of soviet union monotowns and was intrigued by the harsh natural environment, culture, and architecture,’ he writes. ‘It’s like a cool made-up scenario to me. As a result, I wish to create something that reflects or even enhances the weird confrontations of this nature. McDonald’s is an excellent symbolic icon for a nation in conflict with its traditions. It has been incorporated into the cultural setting of the Soviet Union as part of its historical context.’

The first McDonald’s restaurant in the Soviet Union opened in 1990. It was such a hit that law enforcement agents struggled to keep crowds of Muscovites under control at the opening. The Soviet Union broke up a year later, but McDonald’s is still operating today.

The architectural motifs throughout the book range from housing renderings to natural settings to social criticisms, and the photographs are all computer-generated projections. ‘In 2020, I decided to test it out to learn some software packages used widely in the gaming sector during COVID-19’s peak. I believe that tools are extensions of the mind. I’m gradually developing modeling, texturing, compositing, and rendering skills, which allows me to turn some of my ideas into real photos. It’s been a great experience overall.’

The architect has continued to explore this topic since his Mcdonald’s series, taking on various companies. Coca-Cola, Shell, Nike, and Chanel are just a few of the corporations he’s worked with. ‘I’m hoping that my work will cause people to consider issues in the consumerist society that are yet to be discovered,’ he concluded.