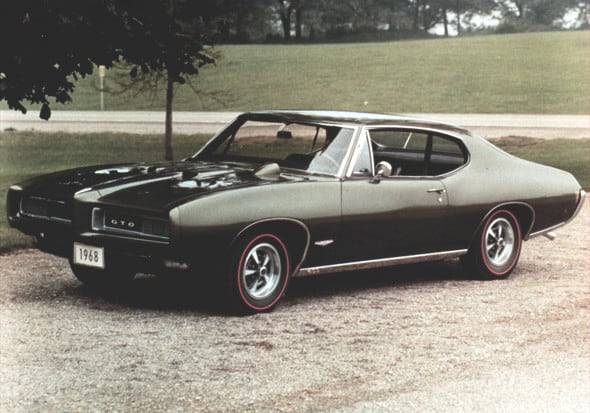 Although the muscle car era was short-lived, it still defined a generation in America and has given us possibly some of the most collectible cars in all of automotive history today. With the sharp lines, wide profiles, muscular looks, and chrome, these cars looked mean.

The definition of a muscle car is a mid-size model car, with V8 engines, generally produced between 1965 and 1973. Most muscle cars were current mid-size models being produced by car manufacturers, and they added a large V8 engine, special trim, and usually better handling and performance options like suspension, braking, etc. A good example of this is the 1970 Chevrolet Chevelle. This model was designed as a mid-size family vehicle and the base model was powered by a lonely ‘ol 4 cylinder engine, or you could team it up with the biggest muscle car engine of it’s time, the 454.

The muscle car era coincided with the first baby boom generation. With the end of World War II, soldiers came home and there were babies everywhere! Cars during WWII and after were pretty conservative in their styling and speed. Chop Shops and performance shops sprung up after the war, and the hot rod was born. The problem with this was it cost a lot of money and took a lot of work to modify a car. It was not economical for most.

This is what made the muscle car successful with the new baby boomers – price. Factory performance was a lot cheaper, but the current models lacked power and speed. That all changed in 1964 with the Pontiac Tempest. The GTO package on this model added a 389 V8 engine, along with a floor-shifted transmission, special trim, and GTO badges. GM Corporate policy at this time did not allow anything other than a full-size model to have anything larger than a 330 cid engine. The engineers at Pontiac worked around this by offering the 389 cid engine as an option, instead of creating a new model for it. Pontiac planned on selling 5,000 GTO’s that first year; 32,450 were eventually sold that first year, starting the American muscle car race.

The Plymouth Super Bird was created for the same reason as the Dodge Daytona — a full-on high-speed race machine designed for the NASCAR races, but available to the public. Trying to capture some of the success that their Dodge brothers had in 1969 with their Daytona, Plymouth tried the same thing in 1970 with their creation, the Plymouth Superbird. Although similar in appearance, the Superbird was actually quite different from the Daytona. The Superbird was based on the Plymouth Road Runner and the nose, airfoil, and basic sheet metal was different between the Daytona and Superbird. The special nose added 19 inches to the overall length (the Daytona’s was 18 inches), and the trunk spoiler was more angled and higher than the Daytonas. On both models, the spoiler was two feet high so that the owner could open the trunk. Although it created quite an impression on the street, the wing did almost no aerodynamic good under 90 mph.

NASCAR only required 500 copies to be built in 1969, but in 1970, NASCAR required a manufacturer to build one unit per dealer. In the end, Plymouth built a total of 1,920 SuperBirds. SuperBirds were available with three different engines. The most popular was the basic Super Commando 440 V8 with a single four barrel carb rated at 375 bhp. Next up was the 440 Six Pack rated at 390 bhp. At the top, and ordered by just 93 buyers, was the mighty 426 Hemi, rated at 425 bhp. Despite the success of the SuperBird on the tracks, 1970 would be the only year it was made.

The Dodge Charger was introduced on January 1, 1966. Built off of the Dodge Coronet chassis but using its own body, the Charger was Dodge’s first fastback, high-speed street racer. It featured many styling cues from the Charger II concept car like a fastback roof design and full-width taillamps. The interior featured four bucket seats and a full-length floor console.

Ford and the A.O. Smith Company facility in Livonia, Michigan now had control of the production of the Shelby Mustang as it rolled into 1968 with the introduction of a new body style – the convertible, which was available in either a GT350 or GT500. To be official, the 1968 cars were renamed Shelby Mustang Cobra GT350/GT500/GT500 KR, reflecting Ford’s recent use of the Cobra name in all of its Ford performance parts vehicles. Many of you know this legendary machine from chase in the movie “Gone in 60 Seconds”:

The third generation of Corvettes began in 1968 and lasted for 15 years. The design was different in appearance from any other Corvette. Their design cues came from Bill Mitchell’s ‘Mako Shark II’ concept vehicle. The Mako Shark II was displayed at the New York International Auto Show in April of 1965. A running version using a 427-cubic inch V8 was displayed at the Paris Salon. For the rest of 1965, the vehicle was toured throughout the United States and Europe.

The 1971 Plymouth 426 Hemi Cuda was a real eye-catcher in its day and is now one of the most highly sought-after muscle cars from that time in history. The Hemi Cuda was a performance option of the Plymouth Barracuda during its third generation of production. The Barracuda had such a popular design that the Dodge division at Chrysler offered a twin car called the Challenger that matched the Barracudaâ€™s design in many ways. The main difference was the length of the wheelbase. The Challenger wheelbase was two inches longer.