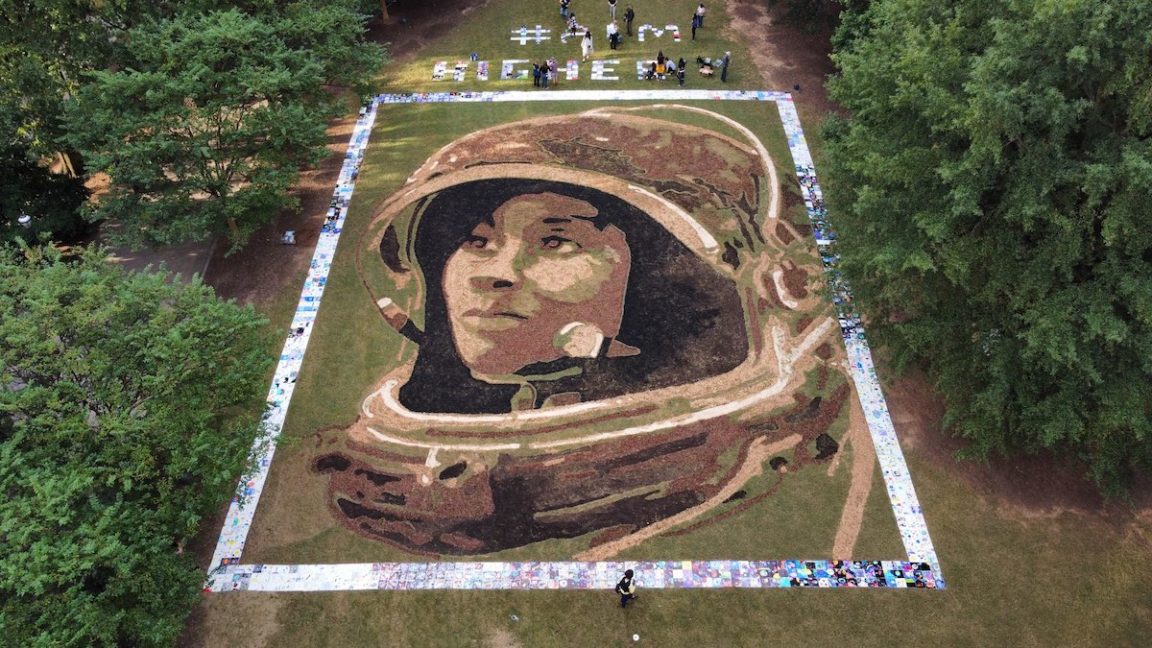 Stan Herd’s portraits are so large, they can be seen from the moon. Four decades, Stan Herd has been painting the land for four decades, inspired by his upbringing on a farm in Kansas; he takes his love and knowledge of the land to new heights with incredible portraits. His latest work is no exception – it stretches over 4,800 square feet and features NASA astronaut Stephanie Wilson. Located in Atlanta, it was created to celebrate International Day of the Girl and World Space Week.

From above, it’s easy to appreciate the intricate detail of Herd’s work. The talents he has developed over decades of crafting these Earthworks come through. Herd doesn’t just execute these parts independently; instead, he believes in the value of collaboration. The making of Stephanie Wilson’s painting was a collaborative effort that, as usual, relied on the community. Herd framed Wilson’s beautiful artwork in 1,500 tiles hand-painted by youngsters from the greater Atlanta region.

We had the chance to talk with Herd about his lengthy career, how he became involved in painting portraits of musicians, and which Earthwork makes him the proudest. Read on for Freeyork’s in-depth interview with Herd.

You’ve been doing these excavations for a long time. What prompted you to begin in the first place?

I studied art history as a student of art history and a reasonably active artist in high school and college, so I gave up my ambition to be a musician to devote all of my energy to creating. I achieved it.

Like other musicians, painters, sculptors, actors, and filmmakers, I wanted to be at the forefront of my profession and create something distinctive and innovative. All of us were thinking about how to find a new way “to see.” Earthworks were still relatively unknown in the art world, but Hizer and Christo followed and accepted.

I grew up on a Kansas farm as a youngster, and I felt I knew something about the land and the people who had formerly worked it. My primary interest was in the first people—the Native Americans whose property my forefathers had taken possession of. In the soil of my forefathers, I would devote my life to producing statement works. In addition, I painted a variety of paintings, created hundreds of prints, and experimented with film, sculpture, and music.

What is the most enjoyable aspect of these projects for you?

The “collective nature” of collaborating to build massive works with many assistants, landowners, horticulturists, photographers, students, and the public is what makes the experience most gratifying—a sense of using the work’s production as a trigger for exchange and enlightenment. At a minimum, I believe that the results are a platform for discussing nature, humanity’s connection with nature, the environment, and art as agents of social change.

What type of equipment do you use while constructing these items?

The equipment is comparable to those used by a gardener, farmer, or landscape architect. From shovels, hoes, and rakes to gas-powered weed eaters, tractors, plows, drills, lawnmowers, and now drones have come a long way. We used airplanes and helicopters in the past.

What was the inspiration for the Stephanie Wilson painting, and how did you go about creating it?

After creating a portrait of John Lewis in a park in Atlanta as a political campaign to draw attention to “progressive” politics leading up to the crucial “runoff” elections in Georgia, I realized it would do an excellent project for this class. My partner, Christina Korp, subsequently asked me to join the Artemis program, of which Ms. Wilson is a part. My recent ties to the city in Atlanta aided in that goal.

Do you have one image that you are particularly pleased with?

The ambitious Young Woman of China was my most comprehensive project to date. I spent two years in southwest China working with 150 Chinese laborers, engineers, artists, masons, gardeners, heavy equipment operators, and company executives. The image is dedicated to women’s concerns and the Indigenous population—four acres, ground cover, native flowers, marble, stone, and granite. The picture will survive an earthquake and be visible for one hundred years or more.