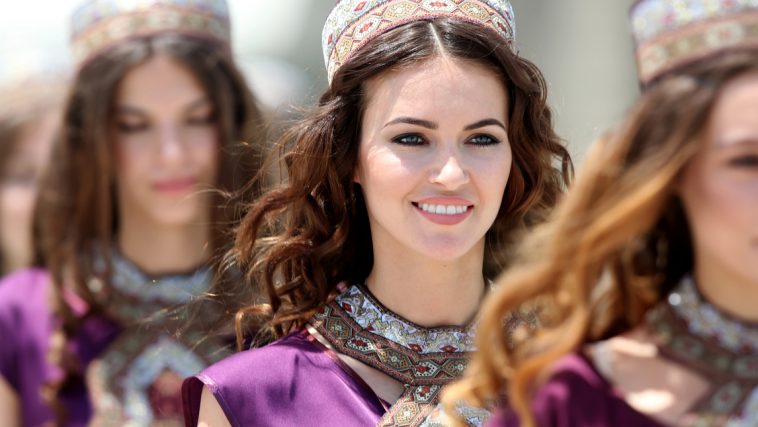 The Azerbaijanis are a Turkic People living mainly in the Republic of Azerbaijan and northwestern Iran, as well as in the neighboring states. Also referred to as Azerbaijani Turks (Azərbaycan türkləri, آذربایجان تورکلری) or Azeris (Azərilər, آذریلر), they live in a wider area from the Caucasus to the Iranian plateau. The Azerbaijanis are predominantly Shi’a Muslim and have a mixed cultural heritage including Persian, Turkic, Iranian and Caucasian elements.

The Azerbaijanis speak Azerbaijani, a Turkic language descended from the Western Oghuz Turkic language that became established in Azerbaijan in the 11th and 12th century CE. Early Oghuz was mainly an oral language, and the later compiled epics and heroic stories of Dede Korkut probably derive from an oral tradition. Modern Azerbaijani literature continued with a traditional emphasis upon humanism, as conveyed in the writings of Samad Vurgun, Shahriar, and many others. Azerbaijanis are generally bilingual, often fluent in either Russian (in Azerbaijan) or Persian (in Iran) in addition to their native Azerbaijani. As of 1996, around 38% of Azerbaijan’s roughly 8,000,000 population spoke Russian fluently. An independent telephone survey in Iran in 2009 reported that 20% of respondents could understand Azerbaijani, the most spoken minority language in Iran, and all respondents could understand Persian.

Islam in Azerbaijan and Islam in Iran majority of Azerbaijanis are Twelver Shi’a Muslims. Religious minorities include Sunni Muslims (mainly Shafi’i just like other Muslims in the surrounding North Caucasus), Christians, Jews, and Bahá’ís. An unknown number of Azerbaijanis in the Republic of Azerbaijan has no religious affiliation. Many describe themselves as Shia Muslims. There is a small number of Naqshbandi Sufis among Muslim Azerbaijanis. Christian Azerbaijanis number around 5,000 people in the Republic of Azerbaijan and consist mostly of recent converts. Some Azerbaijanis from rural regions retain pre-Islamic animist or Zoroastrian-influenced beliefs, such as the sanctity of certain sites and the veneration of fire, certain trees and rocks. In Azerbaijan, traditions from other religions are often celebrated in addition to Islamic holidays, including Norouz and Christmas. After the fall of the Soviet Union, Azerbaijanis have increasingly returned to their Islamic heritage as recent reports indicate that many Azerbaijani youths are being drawn to Islam.