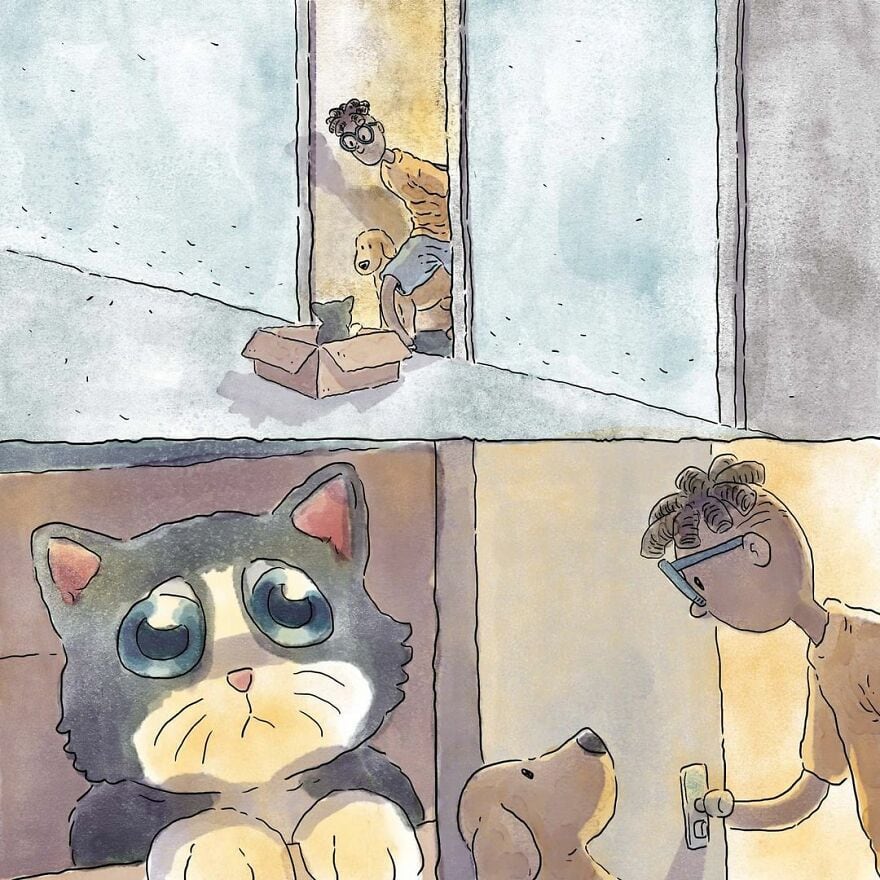 A Newcomer to Your Door is a silent comic about the joys of adopting a cat. Ademar Vieira, Brazilian journalist, and illustrator tells the story of how he adopted his latest companion–a stray kitten that one day appeared outside his door. “We don’t expect when sometimes we adopt them to do good and help them, but they are the ones who do good and support us,” wrote Vieira in his comic. The artist dedicates this comic to all cat lovers out there.

In a recent interview with Bored Panda, Vieira explained that he found a stray kitty outside his door one day. Even though he only started to feed her, he eventually decided not to adopt her because she was always waiting for him on his doorstep when he returned home and wanted only milk from time to time as well as cuddles. That is until one day where Ademar arrived back at home after work but didn’t see the usual feline friend there; this concerned Ademar so much that it made him think something terrible had happened – thankfully (and luckily!), they both showed up again later in different circumstances which led them into an adoption situation!

Ademar never imagined that he would be living with a cat as a pet. He was an artist who lived alone and had been for years. He thought his lifestyle just wouldn’t allow him to have a cat, but then one day, he came back from the store and found her waiting for him at his front door. She couldn’t wait to say hello, so she was sitting in the doorway when he got home.

The cat was getting really tired of all the attention she got from her new human, and he seemed to have a lot more time for her than his other pets. He called it ‘affection,’ but she didn’t think that was what it had been in the old days. She would never admit it out loud and not even to herself, but when she wanted something done around here- like to be fed or petted- there were times when he actually listened.

Ademar believes that people who live with animals understand the true extent of human responsibility and how we should work to better care for our planet. The artist says, “We are responsible for this planet and have caused its impact; it is up to us to take better care of it so other living beings can enjoy a good life too.”