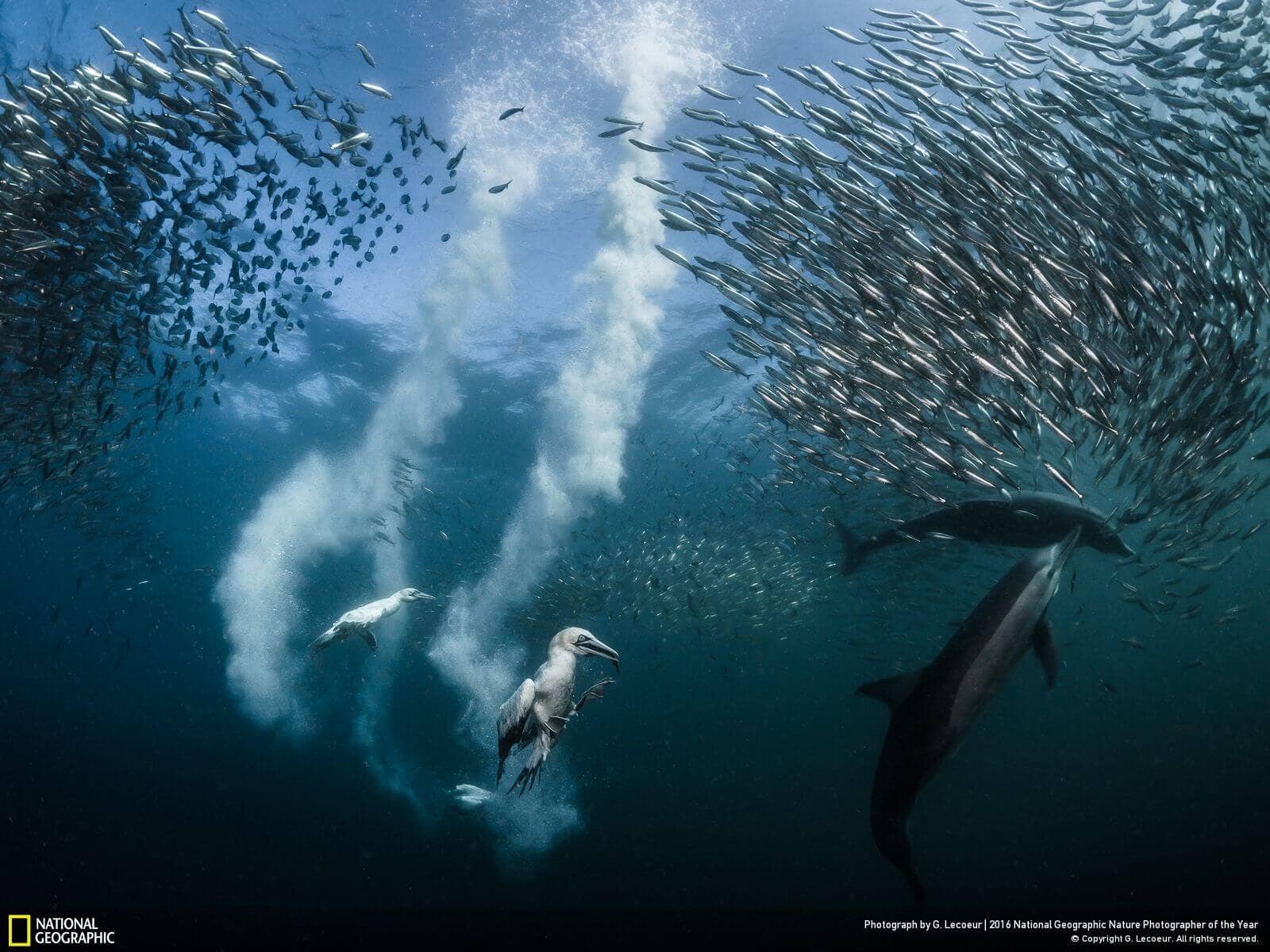 Greg Lecoeur/2016 National Geographic Nature Photographer of the Year. Sardine Run. 1st Place—Action + Grand Prize Winner: During the sardine migration along the Wild Coast of South Africa, millions of sardines are preyed upon by marine predators such as dolphins, marine birds, sharks, whales, penguins, sailfishes, and sea lions. The hunt begins with common dolphins that have developed special hunting techniques to create and drive bait balls to the surface. In recent years, probably due to overfishing and climate change, the annual sardine run has become more and more unpredictable. It took me two weeks to have the opportunity to witness and capture this marine predation.

After analyzing thousands of amazing entries over many months, a Grand Prize Winner of the 2016 National Geographic Nature Photographer of the Year contest has finally been declared. Greg Lecoeur of Nice, France was granted the coveted title with his Sardine Run photograph that was captured underwater off the coast of South Africa. The image was taken in 2015 as billions of sardines spawned and moved along with its eastern shore, with this natural occurrence attracting swarms of predators like dolphins, whales, sharks, and birds. Lecoeru’s prize includes a 10-day trip for two to the Galápagos with National Geographic Expeditions and two 15-minute image portfolio reviews with National Geographic photo editors.

Lecoeur describes the unusual experience of shooting this extraordinary photo. “One day, the ocean was full of energy. We were escorted by hundreds of dolphins and from a point on the horizon, frantic sounds of gannet birds became louder and their dives from the air seemed to accelerate as they shot straight down, piercing the surface of the sea. Our dive boat headed towards the vortex of sea birds in the air, the adrenaline rush grabbing all of us aboard the Zodiac. The hunt was on! Before jumping into the water, I could not imagine the incredible spectacle that would be found under the surface. All the region’s predators seemed to have gotten the same invitation. Whether friends or enemies, all predators here combine to form a single army, together with hunting the small sardines, leading to the greatest “show” on earth… In my view, as a passionate marine biology photographer, this underwater predation is the most exciting and powerful behavior to witness from nature.”

Contestants submitted photographs in the four categories of Action, Landscape, Animal Portraits, and Environmental Issues via National Geographic’s photography community, Your Shot. Winners of top prizes include Varun Aditya, who set first in Animal Portraits for a hypnotizing photo of a snake amidst a dense forest; Vadim Balakin in the Environmental Issues category for a jarring photo of polar bear remains in Norway; and Jacob Kapetein in Landscape for a mystical image of a beech tree.