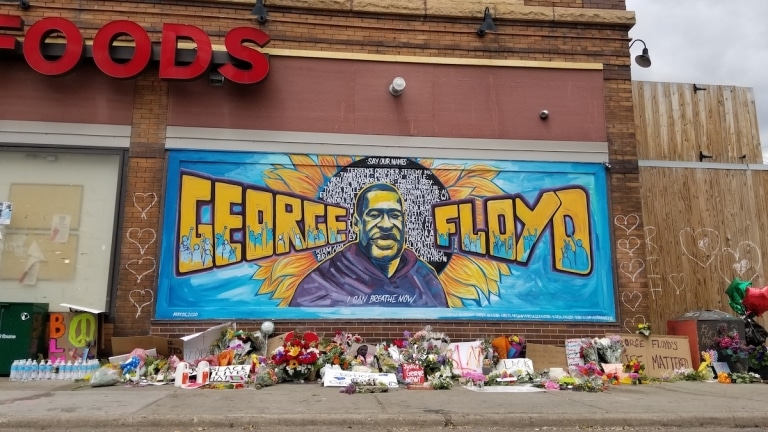 Street artists from all over the world, join together into paying tribute to George Floyd. His cruel death continues to feed protests and manifestations, calling for an end to police brutality and racism.
Artists use their talents to give more voice to the movement: Black Lives Matter. They often include the names of other victims of police violence.
Particularly moving is the mural painted at the intersection where his murder happened, just a few days after. By this stage, all four officers, who were at the scene, have now been arrested. Derek Chauvin – a former police officer – the one kneeling on Floyd’s neck for roughly 9 min – was charged with third-degree murder at first, now it has changed to second-degree murder. The mural in Minneapolis has now become a memorial for George Floyd.
One of the artists, who worked on the Minneapolis mural, Xena Goldman, shared with My Modern Met, that it was crucial for all the artists, that no one, ever walk through that crossing without acknowledging what happened. Cities from Berlin to LA, Syria to Dublin are seeing new memorials popping up. Many of them include infamous words “I can’t breathe” and the names of other police brutality victims.
What we can see on these murals is proof that what happened to George Floyd goes beyond America. Artists Aziz Asmar and Anis Hamdoun from Syria painted their painting as a call for peace and love. They shared with a newspaper that George Floyd’s death reminds them of Syrian civilians who got murdered by suffocation when hit with chemical weapons by the Syrian regime. Another painted wall in Houston, made by Doneeboy, has a private connection to Floyd. The artist painted the mural across the street where Floyd grew up, at the request of his childhood friend. While the artist was painting, his family and friends were sharing stories about good old times. Maybe, all this art can bring some cleansing for those close to Floyd.
Individual artists are taking their art to another level. Jammie Holmes moved his work to the skies by getting airplanes fly banners in Detroit, LA, Miami, New York, and Dallas. Each flag had a different phrase, including “They’re going to kill me” or “My neck hurts.” As Holmes had also been a victim of police misconduct, this situation is very personal to him.
He wrote that this protest is meant to be a protest and an act of social conscience to bring people together in their collective rage at the inhumane treatment of United States citizens. He hopes that people from all over the US will apply outlets available to them to demand change.
Take a look at some of the created murals that appeared after George Floyd’s death. To know more about this situation, and to get a better understanding of it all, read more about what you can do to be a part of this movement.