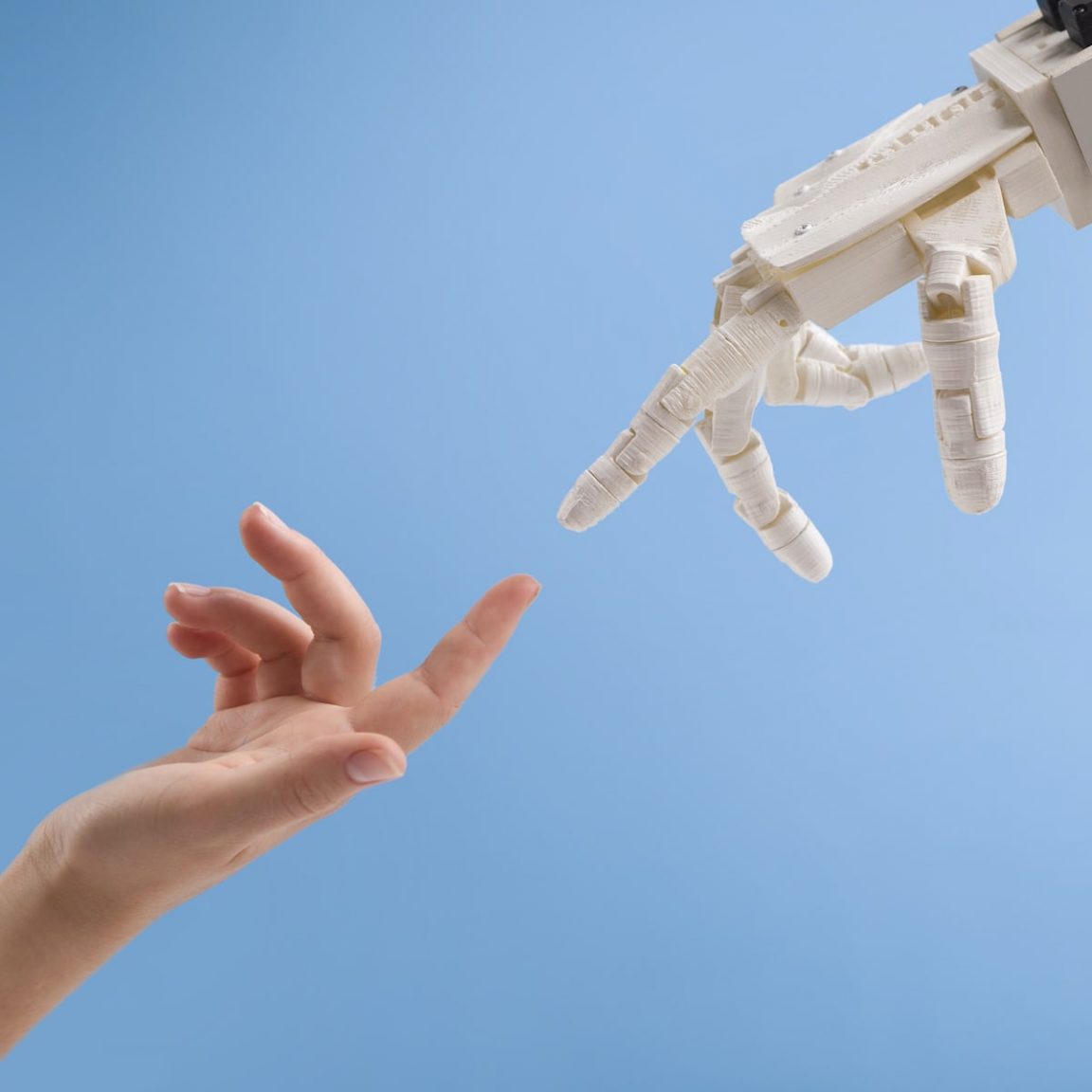 Human and robotics cooperation. Female and robot hands reaching to each other on blue background

In June 2019, Ai Da, the world’s first artificial intelligence-driven humanoid robot, held its solo art exhibition at the University of Oxford. A study from the Centre for Economic Performance stated that employing robots to perform specific tasks increased annual GDP growth by 0.37 percent and labor productivity by 0.36 percent between 1993 and 2007. A report by McKinsey predicted that in the future, autonomous vehicles, including drones, would deliver some 80 percent of all purchased goods.

If these facts do not compel you to sit up and take notice of the advancements made in the field of robotics systems, then what will?

With the advancements in the field of robotics, there has been an inherent fear that one-day robots will overtake humans. With examples such as Ai Da, it does seem scary. However, you need to understand that it is human intervention that allows technology to foster and expand. Thus there is every possibility of utilizing various forms of robotics to maximize our work efficiencies. Let’s delve a little deeper.

Robots in the Workplace

Encouraged by the scope of enhanced productivity and efficiency, companies are increasingly considering robotic interventions at the workplace. There are different kinds of robots for different types of work. These include:

What Can Humans and Robots Do Together?

Unlike the common notion that robots are going to make humans obsolete in the workplace, future office places might witness an environment where humans and robots co-work. As strange as it may seem, it is actually not an entirely new concept. For example, the military has already been using drones for surveillance and ground robots for bomb disposal. Almost every company is using automated software (Robotics Process Automation) for various functions.

Researches, in the field of robotics, claim that a team of humans and robots can lead to greater efficiencies as compared to a group of humans or robots alone. This happens because a robot can perform mundane or physically challenging tasks, such as data crunching or lifting heavy weights, faster and with higher precision.

For instance, minimally invasive surgeries are a classic example of a human-robot team working together. In this process, a surgeon conducts a laparoscopy with a robot manipulator with cameras inserted inside the patient. The surgeon performs the procedure externally.

Proof that Together this Can Work

As is evident from the examples mentioned above, humans and robots collaborating is already a reality. To what extent this collaboration can work will be become more apparent if we consider some of the real-life examples of top-notch companies that have adopted robotics as part of their working environment.

One of the earliest companies to have adopted robotics was Amazon. The e-commerce giant has been investing in robotics for several years now, their automated bots used in warehouses being the most common ones. The company ventured into robotics back in 2012. By 2016, Amazon already deployed close to 30,000 of these self-manufactured bots in their facilities. What is more interesting is the fact that Amazon went on to hire almost 300,000 full-time workers globally during the same period.

In 2018, the company applied for a patent for its very own sidewalk rolling robot to cater to the last mile issue common to delivery processes. In early 2019, retail giant Walmart introduced robots in nearly 5,000 of its stores primarily to scrub floors, manage stacking of inventory, scanning boxes, etc.

What Type of Robot Fits Your Needs?

It is essential to understand that robotics is not just about artificial intelligence-driven bots but also about software robots that follow human actions. These are called Robotic Process Automation

(RPA). Thus, the type of robotics system that you will employ in your business depends upon the core function of your business. It is also possible to utilize both in a single business model.

Industrial or collaborative robots driven by AI are extensively used in manufacturing and warehousing, transportation, and more. However, some companies utilize easy to use RPA that goes unseen. Many companies deploy RPA to simplify and expedite mundane tasks like pulling large amounts of data, chatting with customers, or answering employee questions. Several automated solutions make workplaces more accessible for employees and improve facility management processes.

Is Robotics the New Industrial Revolution?

When the world was hit by the industrial revolution, many believed it would lead to technological unemployment. On the contrary, people adapted to the change that machines brought on. There is a substantial probability that something similar will happen with robotics as well. As per the International Federation of Robotics, there are almost 2.5 million robots in use across the world today. However, as opposed to the common notion, this need not be a cause of concern.

The World Bank’s World Development Report 2019 states that while automation displaces workers, technological innovation creates more new industries and jobs on balance. In fact, some of the most critical or high-profile jobs that exist today were unheard of say about ten years ago. Innovations in robotics will definitely go a long way in cost reduction, higher efficiencies, and increased productivity. Thus, the future will most likely witness people embracing this change and adopting methodologies and skillsets to co-exist with robots.