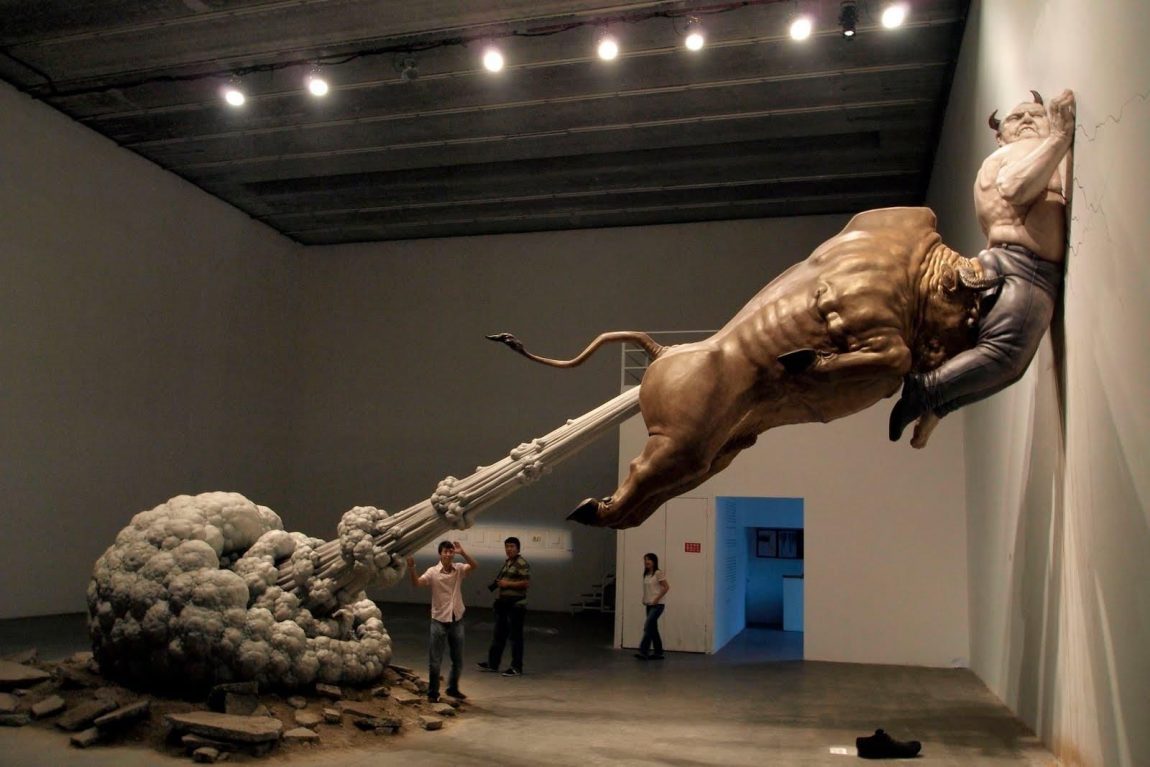 Art is not always beautiful. It can be scandalizing, it can be gross, it can be disturbing. Sometimes it demonstrates the quirks of the artist, sometimes of the times and society. Art has always been a medium of revolution. We catch some of the quirkiest art pieces across the world that stand out for their shock factor.

This famous bull fart sculpture in Beijing by Chen Wenling represents the Wall Street . The man being kicked in the butt is Bernard Madoff who was sentenced to 150 years in prison for what is said to be the biggest financial fraud in the US.

This giant swimmer on South Bank of River Thames in London is one that makes every head turn. Swimming through grass, he is 46-foot long and 10-foot tall, and was built courtesy the reality show “London Ink”.

Titled ‘The Silent Evolution’ by Jason de Caires Taylor, this one resembles a lost city. It is part of the world’s largest underwater museum, situated in Cancun, Mexico. No doubt Forbes Corporation voted it as one of the most unique places in the world.

These cheeky (pun intended) statues of two massive Buddhas climbing a building were put on display on the wall of a Chinese eatery. Though they had to be removed in the face of protests and hurt sentiments, they remain to be one of the quirkiest sculptures in Asia.

These incomplete ‘half-eaten’ sculptures by Bruno Catalano are one of the most spectacular yet disturbing statues. Named as the “Les Voyageurs”, they might not seem as exactly inspiring to the everyday office-goer. Or perhaps they might inspire one to throw that bag and claim one’s life and body back.

5.  Walking to the Sky, Pittsburgh Pennsylvania

Office-goers walking to office, just that here they are walking on a vertical pole that seems to disappear in the sky. No prizes for guessing it represents the professional ladder we all aspire to climb. Not exactly a thing of beauty to look at.

This one was accused by authorities of being an eyesore in the landscape of Hamburg. But the 67-feet long lady bathing in the lake of Hamburg attracted a lot of attention from passers-by who came specially to take a look at her from close. The installation, titled Die Badende (The Bather), was an ad for Soap & Glory, a UK-based beauty products company.

All art is not pleasant to the eye. It can be gross, it can be disturbing. This statue vomiting water right on the street is one sight that is difficult to ignore. It doesn’t help if the statue looks like a deformed apparition. We wonder how it would have been if this had been the design for a water cooler.

This tree, located in a financial district of London, replaced a natural tree that was dying in the face of pollution. French sculptor Pierre Vivant is the creator of this tree that is seen as an ominous symbol of city life. Perhaps these will be the only trees left a few centuries from now.

1. Nation for Itself Forever, Prague

And then sometimes art is to shock. Like this statue by David Cerny which was installed atop the National Theatre on the bank of River Vltava. As if the huge naked man wasn’t enough to raise eyebrows, the statue sprayed jets of steam from down there, taking passers-by by surprise.

There is no end to the bizarre in this world. If you know of any other weirder art installations, let us know in the comments section.