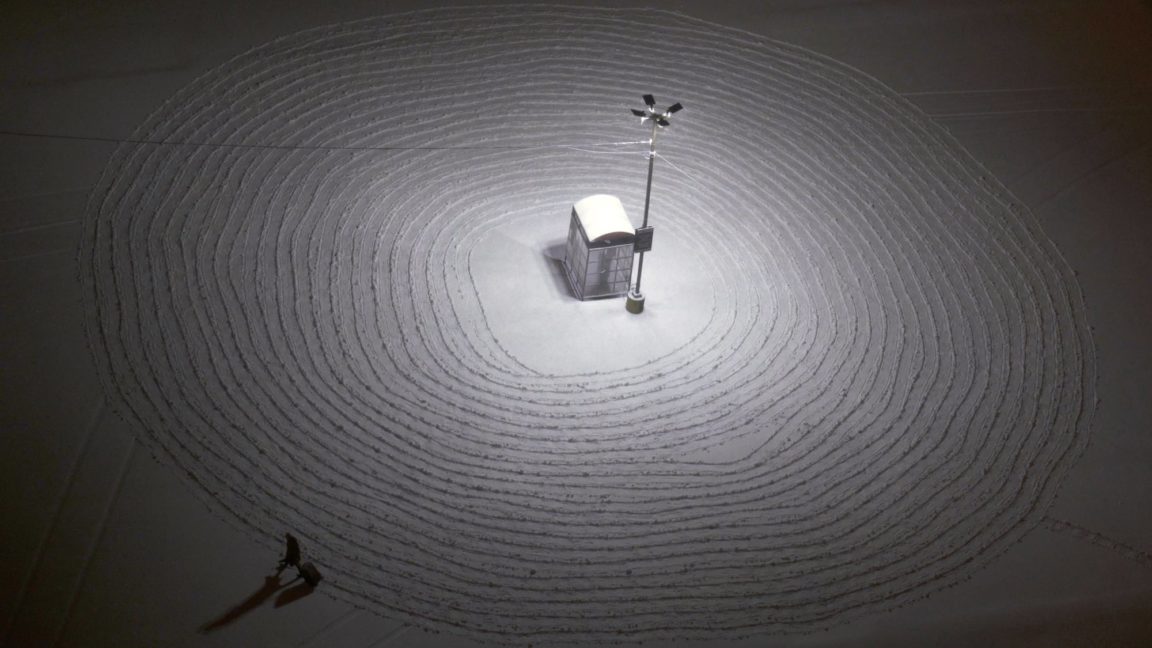 Artist Yuge Zhou grew up in a traditional Chinese household, where she was taught to honor her family ties through her art. In 2020, when the Chinese Lunar New Year coincided with the global pandemic, Zhou postponed a visit with her family in Beijing and turned to her art to cope with the separation. Her latest series of landscape drawings etch broad, circular patterns in the sand along Lake Michigan and in snowy parking lots near her apartment in Chicago. These meditative works are inspired by Zhou’s longing to return home and celebrate familial reunions under the moon.

Many of us struggled to deal with the restrictions. Because of the travel restrictions, Chinese artist Huge Zhou was unable to communicate with his family and finish a two-part video series called Where The East Of The Day Meets The West Of The Night. This series aimed to capture the sun and moon as they sank and emerged from opposite ends of the Pacific Ocean, but owing to Covid-19, it has been postponed indefinitely.

Yuge has extended her video series into a new project that explores her desire to return home while she awaits the opportunity to journey from California to Beijing once more. Yuge’s Moon Drawings are titled in this instance. Yuge drags luggage through the night sky, creating concentric circles etched into the snow that communicates her desire to visit her country.

“In traditional Chinese culture, the moon is regarded as a vessel for human sentiments,” Yuge explains to Freeyork. “The full moon symbolizes family reunion. It was the first perceptible thing to worship China‘s most ancient forbears. When I was a young girl, my mother used to tell me many bedtime stories and folktales about the moon.”

“One of them is about Emperor Wu Di, who ruled during the Han dynasty. Yearning for his lost love, Emperor Wu Di built a terrace in his palace park and named it Fu Yue Tai (俯月台 – for viewing the moon from above). The emperor created a lake at the foot of the terrace because the moon had to be reflected in the water to be seen ‘from above,’ so he built a watery pond at the bottom of the terrace.”

“The imagery of the story comes to mind when the moon rises above my bedroom window. Even though it occurred thousands of years ago, longing is timeless and crosses time-space and history, regardless if you’re a powerful emperor or a homesick immigrant in a new country.”

Yuge can watch the moon rise from her east-facing bedroom every night, thanks to her home in a high-rise apartment building in Chicago. It provides Yuge with the ideal vantage point to film herself drawing the moon on the parking lot outside her building alone in the snow. On a sandy beach by Lake Michigan, she has extended this drawing style into summer counterparts referred to as a ceremony. She says that “as long as I’m unable to return to China,” she will film the same ritual all year and winter.

Yuge says about her experience making the sketches: “As I was walking with the luggage, I thought that not only my camera but also a plethora of other folks were watching me from behind their windows as though the building’s windows were its eyes. The bright illumination from the parking lot lamp provided a stage-like atmosphere and emphasized the theatricality of the event.

“I was so self-conscious that I nearly fell on the snow. But, after a while, I was able to detach myself from what was going on outside of me, whether it was the sound of the city or my own’ imaginary eyes.’ The cold and darkness of the night did nothing to deter me. For me, completing these sketches is like performing an act of meditation inscription.”

Because most of the sketches are completed before dawn, not many people are around to interfere with Yuge as she works. She continues, “Cars would occasionally pass by on the adjacent streets. I recall people staring at me from their automobiles for a long time, but no one has ever approached me.” However, now that this series has been released to the general public, Yuge aims to bring the entire project to a gallery one day.

Given that Yuge has been drawing these images every winter and summer for the past two years, she has observed – the world around this ceremony has altered dramatically, both politically and socially. “However, despite the fact that my luggage’s tracks are coated with snow and waves the next day, I am still waiting for the border between China and America to open up so I can return home because the settings have not changed.”