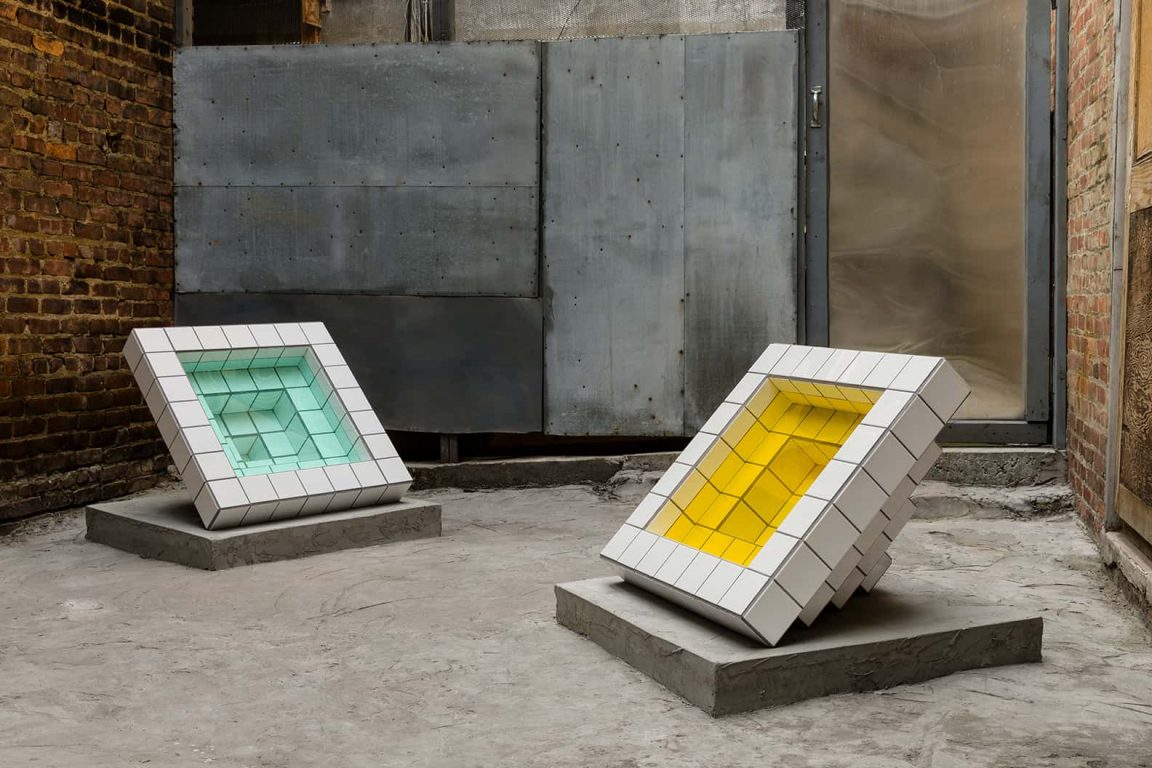 Artist Zac Hacmon is known for utilizing architectural design and ubiquitous materials to develop simultaneously recognizable and unrecognizable non-places: spaces without history or identity, yet are entirely familiar. His work elevates and bends traditional architecture and material usage, focusing on techniques and elements both from the old and the modern, creating “super-modern” architectural models for space-age, futuristic and imaginary worlds. He aims to challenge accepted notions of necessity, functionality, and memory.

Afterlife, a series of tile-based sculptures consisting of 4×4 inch white industrial tiles, encouraging viewers to consider  memory, time, displacement and altered states of ‘being’. The artist began to consider this portal-like concept with the recent loss of a loved one.

The tiles are representative of the artists’ everyday surroundings; subway stations and domestic areas. Public spaces relating to and reflecting the private, each influencing the other. One of the sculptures is equipped with 16 grab bars suggesting safety and security, yet defective.

Several forms are sealed with transparent glass acting like filters or triggers, capturing the space inside these structures, giving a false sense of depth and the notion of another dimension within the form. Viewers are momentarily disoriented by what seems familiar and logical, yet they eventually realize the opposite is true.

Hacmon describes the individual pieces as “devices”, operating with efficiency rather than as a passive object. These “devices’ can be considered, portals; a gate or gateway to somewhere unknown. Shown together, the series of sculptures can be seen as multidimensional or shrine-like.

“I’m interested in the ‘in-between’ spaces, like corridors, borders, transit hubs. There’s something fascinating that draws me to this, like the psychological shift that occurs between places, between a person’s role in one location to another. In my work there’s an attempt to catch the moment of the shift itself. The fragments in my work come from these places, like the ceramic tiles, reminding us of a subway station that is in-between destinations. These places, and alterations of role can offer a sense of freedom.” Zac Hacmon

Zac Hacmon (b. Holon, Israel) is an artist based in New York.  Hacmon uses architecture as a mediator and is interested in notions of the non-place: spaces without history or identity. His work operates with the efficiency of a device rather than as a passive object.

Check out his work at www.zachacmon.com