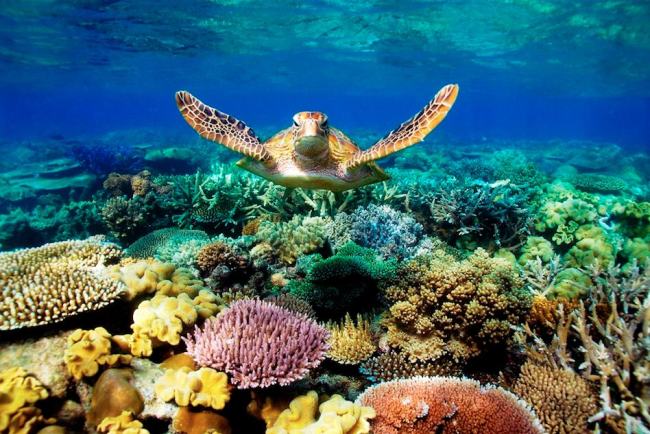 Climate change is a hot topic these days. With ice caps melting and sea levels rising, across the world we are seeing drastic changes in the weather and in the environment. As a result, many beautiful natural wonders are slowly being eroded and may soon cease to exist. Here are just some of the most impressive natural phenomena which future generations may never get a chance to see:

This massive collection of coral, found just off the coast of Queensland, Australia, is on every deep sea diver’s bucket list. This beautiful natural formation is home to more than 6000 species of animals and coral – making it an immensely valuable research site as well as a tourist attraction. Sadly, rises in sea levels and increased amounts of acid in the water mean that the reef may be gone within the next 15 years.

Famous for being the Mountain of Choice for celebs looking to raise money for charity, Kilimanjaro’s glaciers have seen a shocking 82% shrink in the past century – and are expected to be completely non-existent within the next two decades.

If you’re making a trip through Jordan, then you simply must visit the Dead Sea. The mix of rare minerals present in the water makes it one of the first ever natural spas. Plus, enjoy the unusual sensation of being completely weightless in water, as the density of the liquid makes it possible to float without sinking. The dead sea is so small, it’s technically a lake – and thanks to climate change, it’s shrinking further.

Even Santa isn’t safe from climate change! As the Ice Sheets and Glaciers slowly but surely disappear, the North Pole is steadily drifting eastwards towards Greenland. Movement in the North and South poles is normal; however, since 2005 these shifts have been happening at an unprecedented pace. All of this indicates a real risk to the continued existence of the artic – and whilst it’s not a traditional holiday destination, interested parties may want to book a trip to the surrounding countries sooner rather than later.

Deforestation has had a devastating effect on the Amazon and its many inhabitants over the last few decades. Plus, rising temperatures are slowly turning the area into a savannah – so if you want to experience this beautiful and diverse jungle before it becomes a desert then you’d better book your tickets fast.

Christened the “Crown of the Continent” this National Park, known for its mountain ranges, can be found in Montana, new Canada. It is a popular destination for Hikers, Campers and Skiers, and is home to a huge variety of different flora and fauna. However, this may all change as the site’s famous glaciers are melting and are expected to have disappeared by the end of the decade.

This incredible mountain range spans a whopping 2,000 kilometres, and is made up of more than 60,000 square kilometres of ice – which in warmer months become the main water supplies for nearby rivers. As temperatures rise, the Glaciers shrink – which is bad news not just for tourists but also the local communities who use the river water for their own domestic use.

A lot of this information may be shocking to readers. If you are interested in finding out how you can start helping the environment at home then there are many organisations and websites designed to help you to do this. In the meantime though, make sure you check out the best way to experience these amazing natural wonders before it’s too late!