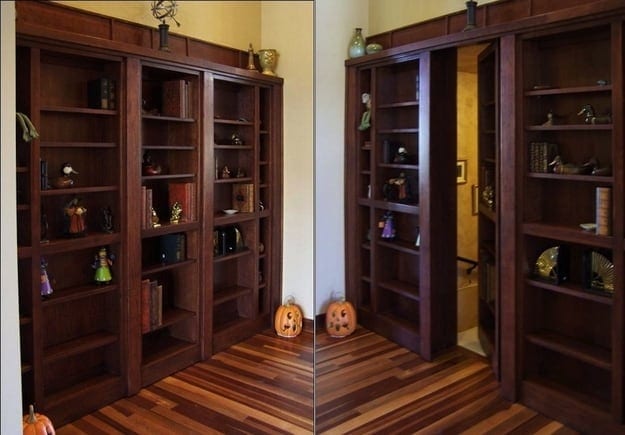 Every great superhero/villain in history has a secret hideaway where he/she can go to and, well, do whatever it is that superheroes or villains do in secret. Except for Spiderman. That guy lives with his aunt. How strange is that!

Now I would imagine most of you haven’t been bitten by a radio-active spider, or weren’t born on a foreign planet, hence, no special superpowers. But that doesn’t mean an awesome hideaway is off the table for you. On the contrary, with a bit of imagination and ambition you could make an impressive secret room where you can escape reality and the mundane pace of your everyday life.

The first thing that pops to my mind when I think about secret in-house hideaways is the sliding bookshelf. We’ve all seen movies where the protagonist touches a book on a bookshelf, or a candle stick on the wall, and, surprise, surprise, the entire bookshelf moves only to reveal a whole new room of many secrets. And while building such a mechanism may require some advanced handyman skills, making a DIY sliding bookshelf won’t be a problem. And don’t disclose the existence of such a room to anyone, including your house cleaner.

2. A Cupboard Under the Stairs

To you Potter fans, it might sound a bit grim, but nobody is saying that if you have one of those you should definitely stick your nephew in there. My old house in Melbourne had one of those which led to the basement. FYI, I converted it to an underground office and it was amazing. Installing some horizontal or vertical panels on the wall also works just fine in making the door leading to your secret lair undetectable.

A secret door in your bathroom that’s skilfully wallpapered and concealed so it blends in with the walls. Where does it lead to? A sauna. How fancy is that? If you have the space, making that idea come to life wouldn’t cost you that much effort. And if you make it, you’ll have a place where no one will bother you.

That right here is my all-time personal favourite. All you need is a an alcove in the wall or a small closet you’re not using. Or you might as well be using it, but the alternative of having a hidden minibar is far more tempting than storing old clothes in there. So get the rags out and build yourself a nice minibar. You deserve it.

5. The Lion, the Witch and the Wardrobe

Running for father/mother of the year? Making a secret Narnia-themed hideaway for your kid will surely get you some extra points. Put an old wardrobe in front of the entrance of a smaller room, cut the back of the wardrobe and voilà. Decorate the inner room accordingly and let your kid discover the entrance to this new and magical world.