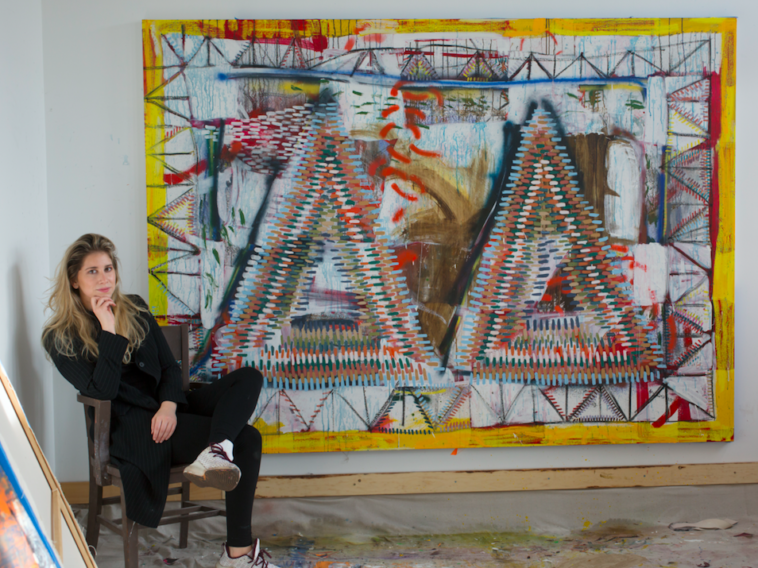 Paige Beeber’s Farbe, currently on view at Freight+Volume in New York, reflects the rupture of daily life in the wake of a global pandemic. Conveying urgency, introspection, and isolation through rhythmic mark-making and affected surfaces each painting is a dance of action and reaction.

Resembling roadmaps or cityscapes in stages of a topographically unfurling, this series of large-scale paintings acknowledge the human body and envelops the viewer’s field of vision in a blanket-like embrace. Dabs of paint reverberate around the perimeter like strips of Morse Code and reaffirm the interiority of works such as Gravity’s Rainbow, Bookends, and Running Up That Hill. Like stitches compositionally holding the paintings together, these marks also mimic the artist’s pacing footsteps within the confines of her own studio.

Furthering her investigation into order and chaos from her 2020 exhibition Severed Mends, at Arts+Leisure, Farbe continues Beeber’s engagement with shifting layers of painterly marks, alternating between controlled, repeating passages and nebulous, fluid washes, underscored by her incorporation of found objects. The impulse of creation is central to Beeber’s work, the crux of her artistic process, with each piece a testament to its unique circumstance of creation. A snapshot of a fleeting mood Beeber’s abstractions crystalize the atmosphere and emotional modality of discrete frames of time within the bounds of a vigorously expressive and dynamic practice.

Immersed in this creative momentum, the works in Farbe are highly energetic, exuding the vitality and immediacy of the present. Kaleidoscopic layers of varying marks form a quivering harmony, as if vibrating with a hidden kinetic force. Beeber’s undulating surfaces evoke the momentary gestures and instincts of her process, encompassing both her self-described “kitchen sink” approach to form and color as well as the reflective, meditative turn of her repetitive marks. In Points Leading to La Sosta, the infinitesimal flux of distance between marks composing the piece’s central triangles lends a sense of frenzied euphoria, a moment of prophetic revelation. Here, in this flickering mirage, Beeber’s staccato patterns gain urgency, and evoke the elemental universality of cave paintings and other primal displays of expression.

The textile-like appearance of these meticulously painted stitch patterns transforms the visual identity of the work, disrupting the linear reading of them as representational objects and instead projecting a sense of an organic, unified whole. In Bookends, a viscous stream of paint appears to ooze from the stitch-motif background, its liquid form and marbled hues imparting a mysterious dimensionality that adds further intrigue to the already psychologically primed composition.

As if turned inward in contemplation, Beeber’s work resists immediate comprehension, obliging the viewer to interpret and search for shrouded meaning behind her heavily layered surfaces. Many of the works in Farbe present a puzzling nature, heightened by an elusive relationship to their titles; oblique and ubiquitous, an out of place obtuse angle appears on the left side of Left Hand Stitch, while Gravity’s Rainbow pours a rainbow that gravity has rendered a puddle. This game-like interplay of language and abstraction animates Farbe, lending a self-awareness to Beeber’s painted strokes and marks.