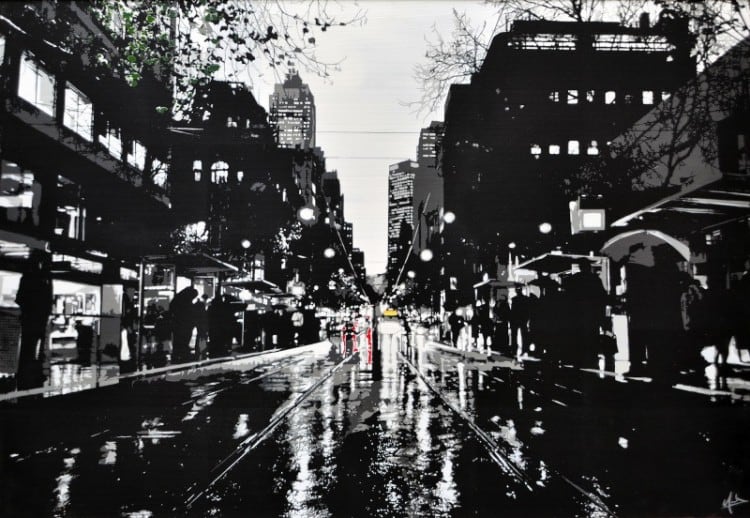 Logan Moody began working on stencil art in 2006 while living in Auckland, New Zealand. Mainly working with simple one colour stencils, he began to slowly develop his style toward a more photorealistic look, focusing on getting as much detail as possible and his overall technique and style.

In 2008 Logan held his first solo exhibition at the Growroom Gallery in Auckland. The show was a huge success, selling out and at the same time managing to clear the large buildup of work he had laying around the house.

In 2009 Logan moved to what he considered the stencil capital of the world; Melbourne, Australia. While originally making the move in order to push his career working on live sports broadcasts, the change also showed a new line of opportunities for his stencil work. The urban environment Melbourne provided became the focus for Logan’s work, and he began using these new surroundings as his inspiration, often taking walks through the city photographing the everyday life to later work into a stencil artwork.

Since moving to Melbourne, Logan has taken part in numerous group shows, published a book of photography, set up an online store, and has been creating work for people all over the world.

Logan is still living and working in Melbourne. While he continues to explore Melbourne’s unique environment, he is always looking for new opportunities, both artistically and for work.